UN/MINUSTAH/Logan Abassi
Haitians voted in the second round of the senatorial and parliamentary elections and the first round for their new president, in Haiti’s capital Port au Prince on 25 October 2015.
22 January 2016

The United Nations and its partners in Haiti reiterated today their support for the outcome of the electoral process in the country, where political tensions have simmered ahead of the second round of presidential polls, which was set for Sunday, but which reportedly has been postponed.

In a joint press release, the Special Representative of the Secretary-General in Haiti, Sandra Honoré, and other members of the international community represented in the Core Group (Brazil, Canada, Spain, France, United States, European Union and the Organization of American States) reiterated their “continued support for the conclusion of an inclusive and fair electoral process while supporting efforts to find a solution that ensures the democratic renewal of State institutions.”

The UN and its partners maintained their “full support to the efforts aimed at identifying consensual and constructive solutions to the current challenges of governance of Haiti through elections and dialogue between stakeholders.”

Further, they deplored the recent acts of electoral violence and called on national authorities, political parties, candidates and their supporters and the electorate in general, “to participate responsibly and with restraint in the electoral process so that the Haitian people can express their will in a climate free of intimidation and violence.”

In early January, UN Secretary General Ban Ki-moon expressed concern at political developments related to the electoral process and urged the Haitian authorities and political actors to ensure that the process would be concluded as soon as possible. In addition, he recalled that the Haitian Parliament has not functioned since January 2015.

According to press reports, the second round of the scheduled Sunday, January 24 presidential election was postponed again Friday amid violent protests and refusal to participate in the opposition. The second round was originally scheduled to take place December 27, 2015. 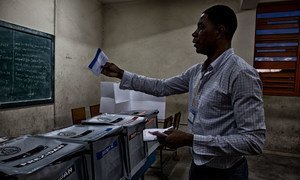 Haiti: UN chief calls for delayed elections to be resolved as soon as possible

For the second time in two weeks United Nations Secretary-General Ban Ki-moon has again voiced concern at political developments in Haiti over the ongoing electoral process, urging the authorities and all political actors to resolve outstanding issues as soon as possible.