World Food Programme (WFP) trucks have begun distributing 1,300 tons of food to Libyans in dire need of assistance, but with nine days left in the year, the United Nations aid plan for more than 2.4 million people for 2016 has received zero funding, the top UN humanitarian official in the strife-torn country said today.

“We are worried about the dire humanitarian situation in Libya, if adequate funding is not allocated to respond to those in need, said the UN Humanitarian Coordinator for Libya, Ali Al-Za’tari. “So far our Humanitarian Response Plan for 2016 is zero-funded,” he added.

“It is not an acceptable situation,” Mr. Al-Za’tari said, stressing that the Libyan Government and the international community need to recognize the enormity of the county’s humanitarian crisis if funding is not received on time and in volume.

“The recently launched Libya Humanitarian Response Plan identified 2.44 million people in need of protection and some form of humanitarian assistance – including 435,000 internally displaced persons – those are acute basic needs in the health, food, protection, shelter and water and sanitation sectors. Of the 2.44 million, 1.3 million Libyans are food insecure,” he explained.

Mr. Al-Za’tari also reported that the distribution, by WFP and the agency’s implementing partner on the ground, Shaik Tahir Azzawy Charity Organization, of approximately 1,300 tons of food items to Libyan communities had begun and that nearly 5,000 families displaced by the conflict will be reached in the coming weeks. 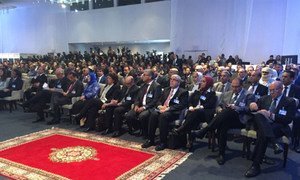