UNSMIL
Participants at the signing of a UN-brokered Libyan Political Agreement in Skhirat, Morocco.
17 December 2015
Peace and Security

“I warmly welcome today’s historic signing of the Libyan Political Agreement by the participants of the Libyan political dialogue,” Mr. Ban said in a statement following the signing that took place in Skhirat, Morocco.

“The agreement will lead to the establishment of a single Government of National Accord and national institutions that will ensure broad representation. It is a critical step in continuing Libya’s post-revolution transition after months of turmoil and uncertainty.”

Mr. Ban said he is hopeful the signing of the agreement will put Libya back on the path of building a democratic State based on the principles of inclusion, human rights and the rule of law. “The door will remain open to those who wish to join on the road to peace. We will continue to work to broaden the basis of support for the new Government,” he added.

Martin Kobler, the Secretary-General’s Special Representative and head of the UN Support Mission in Libya (UNSMIL), also hailed today as “an historic day” for the North African nation.

He said in a statement that “after a period of political divisions and conflict, Libya is restarting its political transition” with the agreement that “puts in place a single set of legitimate institutions – essential building blocks towards a peaceful, secure and prosperous Libya.”

He noted that participating in the signing were representatives of a broad range of Libyan society including members of the House of Representatives and the General National Congress, as well as important public figures from Libyan political parties, civil society, municipalities and women groups.

At the same time, the envoy cautioned that: “We must not forget that this is the beginning of a difficult journey.”

“There is a critical need for national reconciliation and an inclusive national security dialogue,” he added. “Urgent solutions must be found to bolster the Libyan-led fight against terrorism and in particular the threat of Da’esh [also known as the Islamic State of Iraq and the Levant or ISIL].”

He also noted that the “dire humanitarian situation in Benghazi and other areas needs to be addressed as a matter of highest priority, including through the establishment of a dedicated reconstruction fund for Benghazi.”

More than 2.4 million people require immediate humanitarian assistance, of which 435,000 are estimated to be internally displaced, according to the UN.

Libya has been plagued by factional fighting since the 2011 revolution, with the situation continuing to deteriorate in recent months amid significant political fragmentation and violence.

Following broad consultations throughout the year facilitated by the Secretary-General’s former Special Representative for Libya, Bernardino León, it was announced in mid-October that a national unity government could be proposed. The names of candidates for the government's top council were put forward but at that time, the deal stalled when some parties failed to sign off. 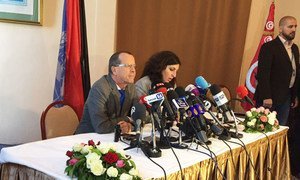 The new United Nations envoy for Libya announced today that the parties to the country’s political dialogue process have agreed to set 16 December as the target date to sign the UN-facilitated agreement on forming a national unity government, aiming to bring an end to a crisis that has left nearly 2.4 million Libyans in desperate need of humanitarian assistance.