WHO/PAHO/Luz Sosa
Epidemics like chikungunya, a virus transmitted by the Aedes aegypti mosquito, was among the disasters which affected 13 million people in Latin America and the Caribbean region in 2015.
13 November 2015

A staggering 13.2 million people in Latin America and the Caribbean were affected by disasters between January and October 2015, a report from the United Nations relief wing revealed, warning the situation could be further exacerbated by the current powerful El Niño.

According to a bulletin published by the UN Office for the Coordination of Humanitarian Affairs (OCHA), the figure exceeds the number of people affected in 2014 (11.4 million), serving as a reminder that “preparedness efforts must remain a priority to reduce impacts and humanitarian needs.”

The report also found that drought affected most people (7 million), followed by excessive rains, floods and epidemics like dengue, chikungunya and cholera.

Some of the other disasters that affected the region in 2015 are hurricanes, violence, environmental emergencies and cold waves, the report said.

Additionally, the report warns that El Niño will worsen drought in Central America and will bring above average rainfall in South America, where it is expected to peak in November-December.

Further, the study Hunger without Borders, conducted by the International Organization for Migration (IOM) and the World Food Programme (WFP) revealed that there is a correlation between food insecurity, violence and migration in countries of the Northern Triangle in Central America.

The report recommended a more profound analysis of the situation in order to have a deeper understanding of the effects of violence, food insecurity and their impact on migratory patterns.

Further recommendations included reinsertion of deportees and returnees, strengthening the resilience of children and youth whose parents have emigrated against crime and violence, promoting livelihoods, and developing advocacy strategies where local governments play a leading role, along with UN agencies and other international organizations.

Lastly, the report underscored the need to initiate concrete actions at the first World Humanitarian Summit, slated to take place in Istanbul, Turkey in 2016, and to find new ways to address the humanitarian needs in a changing world.

“The World Humanitarian Summit is our generation’s opportunity to re-inspire the world with our humanitarian ambition,” said Under-Secretary-General for Coordination of Humanitarian Affairs and UN Emergency Relief Coordinator Stephen O’Brien.

♦ Receive daily updates directly in your inbox - Subscribe here to a topic.
♦ Download the UN News app for your iOS or Android devices.
Niño 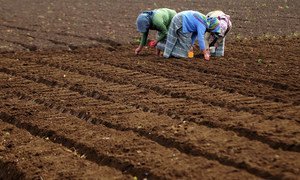 Some 2.3 million people in Central America will need food aid as the current El Niño weather pattern, one of the strongest on record, exacerbates a prolonged drought, the United Nations warned today in the latest alert on the impact of the phenomenon which causes floods in parts of the world and drought in others.