FAO/Seyllou Diallo
A farmer in The Gambia shows a dry tuft of rice in a drought period.
18 January 2016

“The number of people without enough food could rise significantly over coming months as the region moves deeper into the so-called lean season, the period before the April harvest when food and cash stocks become increasingly depleted,” WFP said in a news release. “Particularly vulnerable are smallholder farmers who account for most agricultural production.”

The cyclical El Niño pattern of devastating droughts on some regions and catastrophic floods in others that can affect tens of millions of people around the globe, is already leading to even worse drought across southern Africa, affecting this year's crops.

With little or no rain falling in many areas and the window for the planting of cereals closing fast or already closed in some countries, the outlook is alarming.

“Driving through southern Zambia, I saw fields of crops severely stressed from lack of water and met farmers who are struggling to cope with a second season of erratic rains,” WFP Executive Director Ertharin Cousin said at the end of a visit to drought-prone southern Zambia.

“Zambia is one of the biggest breadbaskets in the region and what's happening there gives serious cause for concern not only for Zambia itself but all countries in the region.”

Worst affected by last year's poor rains are Malawi with 2.8 million people facing hunger, Madagascar with nearly 1.9 million, and Zimbabwe with 1.5 million and last year's harvest reduced by half compared to the previous year due to massive crop failure.

In Lesotho, the Government has declared a drought emergency and some 650,000 people, a third of the population, do not have enough food. As elsewhere, water is in extremely short supply for both crops and livestock. Also causing concern are Angola, Mozambique and Swaziland.

Food prices across southern Africa have been rising due to reduced production and availability. The price of maize, the staple for most of the region, is 73 per cent higher in Malawi than the three-year average for this time of year.

“I'm particularly concerned that smallholders won't be able to harvest enough crops to feed their own families through the year, let alone to sell what little they can in order to cover school fees and other household needs,” Ms. Cousin said.

WFP is working with Governments, regional organizations and other partners on contingency, preparedness to secure food supplies and protect people's livelihoods.

WFP assessment analysts estimate that more than 40 million rural and 9 million urban people in the region live in geographic zones that are highly exposed to the fall-out from El Niño. South Africa, the major breadbasket of the region, has indicated that this El Niño-induced drought is the worst the country has suffered in more than half a century.

One particularly worrying symptom of southern Africa's vulnerability to food and nutrition security is the alarming rate of chronic malnutrition. Levels of stunting among children in Madagascar, Malawi, Mozambique and Zambia are among the worst in the world.

This affects children's physical growth, cognitive development, as well as their future health and productivity.

♦ Receive daily updates directly in your inbox - Subscribe here to a topic.
♦ Download the UN News app for your iOS or Android devices.
Niño 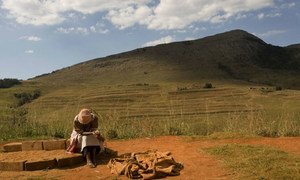 Crop and livestock production prospects in southern Africa have been weakened by this year’s powerful El Niño, while the phenomenon is also impacting agricultural sectors in northern Australia, parts of Indonesia and a wide swathe of Central America and Brazil, the United Nations Food and Agriculture Organization (FAO) said today.