16 November 2015
The current El Niño, a weather pattern of devastating droughts and catastrophic floods that can affect tens of millions of people around the globe, is expected to strengthen further by year's end, on track to be one of the three strongest in 65 years, according to the latest update from the United Nations weather agency.

But the world is better prepared than ever to deal with the phenomenon, caused by the cyclical warming of the Equatorial Pacific Ocean, even though global warming has added a wild card to forecasting the severity of its impact, UN World Meteorological Organization (WMO) Secretary-General Michel Jarraud told a news conference in Geneva today.

“It's not entirely clear how El Niño interacts with the changing climate,” he said, warning that it is playing out in uncharted territory due to global warming. “Even before the onset of El Niño, global average surface temperatures had reached new records. El Niño is turning up the heat even further.”

Based on advice from National Meteorological and Hydrological Services, the worst affected countries are already planning for the impact on agriculture, fisheries, water and health, and implementing disaster management campaigns to save lives and minimize economic damage and disruption, he added.

“Severe droughts and devastating flooding being experienced throughout the tropics and sub-tropical zones bear the hallmarks of this El Niño, which is the strongest for more than 15 years,” he said, noting that peak three-month average surface water temperatures in the east-central tropical Pacific Ocean will exceed 2 degrees Celsius above normal.

But, he stressed: “We are better prepared for this event than we have ever been in the past.”

Various UN agencies have already issued warnings about the current El Niño, in which oscillation of the ocean-atmosphere system significantly impacts global weather, from increased rain and flooding in the southern United States and Peru to drought in the West Pacific and devastating brush fires in Australia.

Mr. Jarraud released the update on the eve of an international scientific conference in New York, co-sponsored by WMO, which seeks to increase scientific understanding of El Niño the event and its impact, and boost resilience to anticipated global socio-economic shocks.

“Our planet has altered dramatically because of climate change, the general trend towards a warmer global ocean, the loss of Arctic sea ice and of over a million square kilometres of summer snow cover in the northern hemisphere. So this naturally occurring El Niño event and human induced climate change may interact and modify each other in ways which we have never before experienced,” he warned.

El Niño has already been associated with a number of major impacts, including coral bleaching hitting US coral reefs disproportionately hard, and tropical cyclones in the Western and Eastern North Pacific basins, such as last month's Hurricane Patricia in Mexico, reportedly the most intense tropical cyclone in the western hemisphere.

In South East Asia, El Niño is typically associated with drought and has helped fuel wildfires in Indonesia, among the worst on record, causing dense haze there and in neighbouring countries, with significant repercussions for health.

In South Asia, it is believed to have played a key role in a shortfall in rain and Southern Africa countries also report below average rainfall, drought conditions and fears of food insecurity.

In South America, El Niño tends to increase rainfall. In 1997-98 rains in central Ecuador and Peru were more than 10 times the normal, causing flooding, extensive erosion and deadly mudslides, destruction of homes and infrastructure, and damage to food supplies.

'Tolerance must be taught, nurtured and defended,' says Ban on International Day 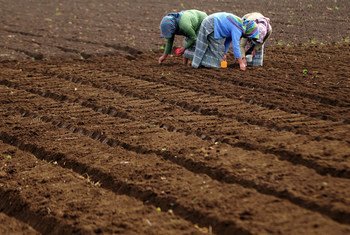 12 November 2015
Some 2.3 million people in Central America will need food aid as the current El Niño weather pattern, one of the strongest on record, exacerbates a prolonged drought, the United Nations warned today in the latest alert on the impact of the phenomenon which causes floods in parts of the world and drought in others.