<a href=http://bit.ly/1jOsxqw>Almigdad Mojalli/IRIN</a>
A protest in favour of the Houthi rebels in the Yemeni capital Sana’a.
7 October 2015

“This is an important step,” Stéphane Dujarric told reporters at the regular press briefing at UN Headquarters, as resolution 2216, other Security Council resolutions, the Gulf Cooperation Council Initiative and the Outcomes of the National Dialogue have been at the core of the UN-led peace process.

In the resolution, adopted by a vote of 14 in favour to none against, with Russia abstaining, the Council demands that the Houthis withdraw from all areas seized during the latest conflict, relinquish arms seized from military and security institutions, cease all actions falling exclusively within the authority of the legitimate Yemeni Government and fully implement previous Council resolutions.

The text also calls on all Yemeni parties, in particular the Houthis, to abide by the Gulf Cooperation Council Initiative and its Implementation Mechanism, the outcomes of the comprehensive National Dialogue conference, and the relevant Security Council resolutions and to resume and accelerate inclusive UN-brokered negotiations, including on issues relating to governance, “to continue the political transition in order to reach a consensus solution.”

These pillars will remain the basis for peace talks, which the Special Envoy has been working towards, added Mr. Dujarric, noting that Mr. Ould Cheikh Ahmed believes that the Government of Yemen, the Houthis and their allies should accept the invitation to join peace talks on this basis.

The Houthis also reiterated their commitment to the seven Muscat Principles that they had previously conveyed. 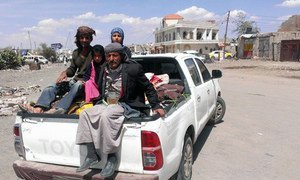 Alarmed at the military escalation by Houthis in many parts of Yemen and the “significant and rapidly deteriorating’ humanitarian situation, the United Nations Security Council today approved an arms embargo against the rebel group’s leadership and demanded that all parties refrain from unilateral actions that could undermine the country’s UN-facilitated political transition.