<a href=http://bit.ly/1DJW6C6>Almigdad Mojalli/IRIN</a>
Yemenis flee the capital Sana’a with their families and few possessions.
14 April 2015

Alarmed at the military escalation by Houthis in many parts of Yemen and the “significant and rapidly deteriorating’ humanitarian situation, the United Nations Security Council today approved an arms embargo against the rebel group’s leadership and demanded that all parties refrain from unilateral actions that could undermine the country’s UN-facilitated political transition.

The measure was approved through a new resolution adopted by a vote of 14 in favour, with one abstention (Russia). The text demanded that Houthis immediately and unconditionally end violence, withdraw forces from areas they have seized, relinquish all arms, cease activities undermining the authority of the country’s legitimate Government, refrain from provocation against neighbouring States, release the Defence Minister, General Mahmoud al-Subaihi, and end the recruitment of children.

The resolution also called upon all Yemeni parties, particularly the Houthis, to abide by the Gulf Cooperation Council Initiative and its Implementation Mechanism, the outcomes of the comprehensive National Dialogue conference, and relevant Security Council resolutions and to resume and accelerate inclusive United Nations-brokered negotiations, including on issues relating to governance, to continue the political transition.

It demanded that all Yemeni parties adhere to resolving their differences through dialogue and consultation, reject violence as a means to achieving political goals, and refrain from provocation and all unilateral actions to undermine the political transition.

As well as adding Abdulmalik Al-Houthi and Ahmed Ali Abdullah Saleh, the son of Yemen’s former President, to the list of individuals subject to the sanctions imposed by paragraphs 11 and 15 of resolution 2140 (2014), the resolution also decided to impose an arms embargo meaning that all Member States would immediately take necessary measures to prevent direct or indirect supply, sale or transfer to, or for the benefit of Mr. Saleh, along with Abdullah Yahya Al Hakim, Abd Al-Khaliq Al-Huthi, and individuals and entities designated by the Committee established pursuant to paragraph 19 of resolution 2140 (2014).

“Every hour we are receiving and documenting deeply disturbing and distressing reports of the toll that this conflict is taking on civilian lives and infrastructure,” said United Nations High Commissioner for Human Rights Zeid Ra’ad Al Hussein. “Such a heavy civilian death toll ought to be a clear indication to all parties to this conflict that there may be serious problems in the conduct of hostilities.”

In addition to hundreds of fighters, at least 364 civilians are reported to have lost their lives since March 26, including at least 84 children and 25 women. Another 681 civilians – possibly more – have been injured. Dozens of public buildings, including hospitals, schools, airports and mosques have been destroyed in airstrikes, through shelling and other attacks.

Over the past week, street fighting also intensified in densely populated areas, particularly in Aden between armed groups affiliated with President Abd Rabbo Mansour Hadi on one side, and those affiliated with the Houthis and the former President Ali Abdullah Saleh on the other. There have also been accounts of recruitment of children as fighters in Aden, Dhale and Mareb.

Several recent airstrikes by coalition forces have hit residential areas and civilian homes in Amran, Taiz, Ibb, Aljawf and Sa’da, with one, on a military base in Taiz on Saturday, hitting a residential area about 500 metres away, killing ten civilians and injuring seven.

He stressed that parties to the conflict should take all feasible measures to avoid locating military objectives in populated residential areas and must exercise maximum care to ensure that civilians and civilian objects are protected against dangers arising from military operations, and he called for the thorough and transparent investigation of such incidents by coalition forces.

Among 52 public buildings either partially or completely destroyed in the past three weeks, eight hospitals were hit in Sana’a, Sa’da, Dhale and Aden, with 17 schools and educational institutions in Aden, Dhale, Hajjah, Ibb and Sana’a also destroyed. The country’s three main national airports and its main power station have also been damaged, as well as bridges, factories, farmland and mosques.

“Hospitals and ambulances must be safe from attacks and allowed to function at all times. Intentional attacks on hospitals or ambulances being exclusively used for medical purposes would amount to war crimes,” Zeid said.

He also warned that the intentional targeting of civilians not taking direct part in hostilities would amount to a war crime, citing particular reports of the killing of civilians by snipers located on rooftops in Dhale, and he also pointed to arbitrary arrests, indiscriminate firing at protesters and attacks against media premises by Houthi-affiliated forces.

Underlining the important role of civil society, particularly in the midst of an armed conflict, he urged all sides to negotiate a swift end to the bloodshed and devastation in Yemen.

“The people of Yemen have already suffered for too long and the calamitous effects of the conflict are already going to take years, if not decades, to reverse,” the High Commissioner said. “Most of the country is now suffering from the effects of armed conflict, with the situation particularly devastating in Sana’a, Aden, Dhale, Sa’da, Hudayda, Lahj, Ibb, Taiz, Amran and Hajjah. The humanitarian situation is appallingly bad, compounded by wanton violence, lawlessness and serious human rights violations.” 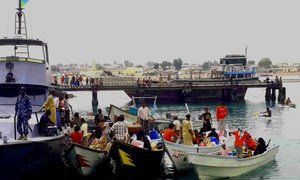 The humanitarian situation in Yemen is “getting worse by the hour,” the United Nations Humanitarian Coordinator for the country warned today, saying that the escalating conflict has put millions of people at risk of physical injury or death.