With South Sudan at crossroads, Ban urges parties to reaffirm commitment to peace

UNHCR/R. Riek
South Sudanese refugees wait to be registered at a crossing into Ethiopia earlier in 2015.

With South Sudan at crossroads, Ban urges parties to reaffirm commitment to peace

29 September 2015
Citing a new window of opportunity for peace in South Sudan, Secretary-General Ban Ki-moon today called on all parties to demonstrate a genuine commitment to the peace agreement signed last month, including by immediately halting military operations and forming the Transitional Government of National Unity.

“The road ahead will be difficult,” said Mr. Ban. “I urge the signatories to honour their solemn commitment and implement the agreement without delay. Reverting to war yet again cannot be an option.”

Speaking at a high-level meeting on South Sudan, held on the margins of the general debate of the United Nations General Assembly, the Secretary-General noted that it is “a pivotal moment” in the history of the world’s youngest nation.

The security situation in South Sudan has deteriorated steadily over the past year and a half since political in-fighting between President Salva Kiir and former Vice-President Riek Machar, and their respective factions, erupted in December 2013. The hostilities subsequently turned into a full-fledged conflict, resulting in reported atrocities and possible war crimes.

“The conflict that broke out in December 2013 dashed the aspirations of the South Sudanese people for a brighter future. It shattered the optimism of the international community. Thousands of lives have been lost in a senseless conflict,” said Mr. Ban.

“When the parties signed the peace agreement last month, they created a new window of opportunity.”

Mr. Ban called on the parties to immediately cease all military operations and form the Transitional Government of National Unity to which they have agreed. The parties must also provide unfettered access to those in need of urgent humanitarian assistance, he added.

“South Sudan’s leaders have a chance to correct their grave mistakes and focus on the well-being of those who entrusted them with this role – the people of South Sudan,” the UN chief stated.

He noted that long-term reforms are essential for South Sudan to transcend ethnicity and rebuild a truly national identity, adding that every effort must be made to promote a more equitable distribution of power and wealth.

“Horrific crimes have been committed against civilians in this war. The social fabric of South Sudan has been shattered. To mend it, the provisions in the peace agreement related to justice, accountability and reconciliation must be implemented in full,” he continued.

The UN will continue to stand by the people of South Sudan, Mr. Ban pledged. “We are ready to support implementation of the agreement and will continue to protect civilians and provide humanitarian assistance.”

He called on the international community to provide economic assistance to South Sudan, while adding that the parties must, in turn, demonstrate a genuine commitment to the peace agreement.

“South Sudan stands at a crossroads. I call on the international community to remain engaged in every step of the implementation of the agreement. I appeal to all partners to reaffirm their unwavering commitment to accompany South Sudan along the path to peace, recovery and reconciliation.”

Addressing the meeting via video teleconference, President Kiir stated that he signed the agreement fully committed to return South Sudan to peace and development.

“When I decided to join the liberation struggle three decades ago, I did not expect to liberate my people in order to take them back to war amongst themselves,” he stated. “Therefore, I am determined to stop this senseless war and make sure that, together with my brothers in the armed opposition, we will build a democratic, united and harmonious country by implementing the agreement.”

Mr. Kiir called on all those gathered at the meeting to prevail on the armed groups so that they respect the permanent ceasefire and assist in the successful implementation of the agreement.

“Our people do not need war but certainly need peace and development. That is what we must achieve for them and that is my promise to you and to my people.” 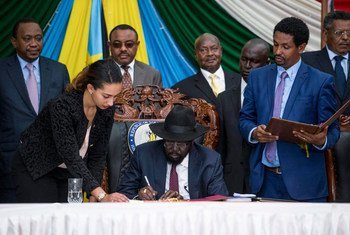 27 August 2015
Welcoming President Salva Kiir’s signing of the agreement on the resolution of the conflict in South Sudan, United Nations Secretary-General Ban Ki-moon said the move is “a critical and necessary step towards ending the 20 month-long conflict that has devastated [the country] and subjected its people to unspeakable suffering.”