4 June 2012
The United Nations refugee chief today warned of a sharply worsening humanitarian situation in South Sudan’s Upper Nile State, where humanitarian agencies have been coping with a sudden increase in refugees arriving from a state in neighbouring Sudan.

The United Nations refugee chief today warned of a sharply worsening humanitarian situation in South Sudan’s Upper Nile State, where humanitarian agencies have been coping with a sudden increase in refugees arriving from a state in neighbouring Sudan.

“This is a dramatic change in an already difficult humanitarian situation,” the UN High Commissioner for Refugees, Antonio Guterres, said in a news release. “Not only are refugee numbers suddenly much higher, but the condition that many of these people are in is shockingly bad. Some have been eating tree leaves to survive along the way.”

Over the past three weeks an estimated 35,000 refugees have arrived in Upper Nile State, with many arriving from the Sudanese state of Blue Nile, according to the Office of the UN Hugh Commissioner for Refugees (UNHCR). This is on top of an existing refugee population there of approximately 70,000, and it adds that the arrivals are continuing.

The refugee agency believes that most of the new refugees in Upper Nile state are too close to the border for their safety.

Bus and tractor-trailer transport is being provided to move people to safer locations at Rum and Yusuf Batil, and groups of refugees are moving on their own to other camps at Doro and Jammam. Road conditions are difficult, partly because of recent rains.

“Pressure is enormous,” Mr. Guterres added. “Despite the rain, this is an area where there’s simply not enough safe drinking water – this, and the security situation, makes it all the more urgent that people are relocated fast to better protected places.”

Including the new arrivals in Upper Nile state, UNHCR said that South Sudan is currently hosting some 150,000 refugees from Sudan, representing a huge logistics challenge for humanitarian aid to be properly delivered.

Last week, the agency said that many of those fleeing to Upper Nile state were doing so because of ongoing bombing and ground fighting between the Sudanese Armed Forces and the Sudan People’s Liberation Army-North in the Sudanese state of Blue Nile. 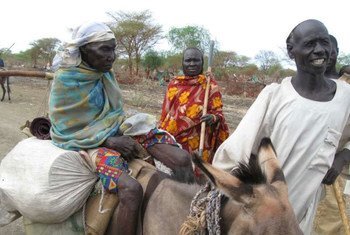 1 June 2012
An estimated 20,000 refugees have amassed on the South Sudan border after fleeing conflict and lack of food, the United Nations refugee agency said today, adding that it is working to relocate them and provide them with emergency aid.