“I cannot put into words how anguished, angered and ashamed I am by recurrent reports over the years of sexual exploitation and abuse by UN forces,” said Mr. Ban addressing reporters at a press stakeout in New York, where he deplored the disturbing number of abuse allegations and affirmed that the “systemic challenge” of sexual abuse demanded “a systemic response” by the UN.

“When the United Nations deploys peacekeepers, we do so to protect the world’s most vulnerable people in the world’s most desperate places,” Mr. Ban declared. “I will not tolerate any action that causes people to replace trust with fear.”

Deployed in early 2014, the UN Multidimensional Integrated Stabilization Mission in the CAR, known by the French acronym MINUSCA, is currently aiming to defuse sectarian tensions across the country. More than two years of civil war and violence have displaced thousands of people amid ongoing clashes between the mainly Muslim Séléka alliance and anti-Balaka militia, which are mostly Christian. In addition, the Lord's Resistance Army (LRA) continues to operate in the south-eastern part of the country.

However, the latest allegations – revealed yesterday by the human rights group Amnesty International and concerning actions by UN 'blue helmets' serving with the Multidimensional Integrated Stabilization Mission in the Central African Republic (MINUSCA) – come on the heels of another series of sexual abuse claims from earlier this year surrounding a deployment of foreign military forces in the CAR.

The Secretary-General urged victims to come forward and report any and all abuses to the UN as the Organization moves forward in doing “all we can to respond to these outrageous crimes.”

As part of the UN’s increased scrutiny into the “global scourge” of sexual abuse in field missions, Mr. Ban stated that he has requested a special session of the Security Council, to take place tomorrow, and will convene a video conference with his Special Representatives, Force Commanders and Police Commissioners in all peacekeeping operations to be held tomorrow. In addition, he announced the immediate resignation of his Special Representative, Babacar Gaye, as head of MINUSCA.

“[Mr. Gaye] has tendered his resignation at my request yesterday,” Mr. Ban explained in response to a question from reporters. He added that while this may appear to be “very strong action” for a Special representative who has been working so honourably during many years in the UN system, “I really wanted to show a strong example and message to all the international community.”

“I will reiterate that leaders must report allegations immediately, investigate thoroughly and act decisively. Failure to do so will have clear consequences,” he stressed in his opening remarks. “I want victims to know that we will strive to uphold our institutional responsibility to safeguard their security and dignity.” 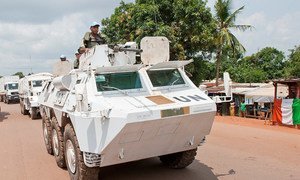 Secretary-General Ban Ki-moon has expressed his consternation regarding a number of allegations concerning the conduct of United Nations peacekeepers deployed to the Central African Republic (CAR), a spokesperson for the Organization has confirmed.