Secretary-General Ban Ki-moon has expressed his consternation regarding a number of allegations concerning the conduct of United Nations peacekeepers deployed to the Central African Republic (CAR), a spokesperson for the Organization has confirmed.

Addressing the regular press briefing at UN Headquarters in New York earlier this afternoon, Spokesperson Stéphane Dujarric told reporters that the Secretary-General remained “personally dismayed and disappointed” by the latest reports as well as the allegations of recent months relating to both the period before UN peacekeepers were deployed in the CAR and since.

“We would like to emphasize once more that no misconduct of this nature can be tolerated and that every allegation will be taken extremely seriously and investigated vigorously and thoroughly,” Mr. Dujarric added.

The latest allegations come on the heels of another series of sexual abuse claims from earlier this year surrounding a deployment of foreign military forces in the CAR.

Deployed in early 2014, MINUSCA's presence in the CAR is currently aiming to defuse sectarian tensions across the country. More than two years of civil war and violence have, in fact, displaced thousands of people amid ongoing clashes between the mainly Muslim Séléka alliance and anti-Balaka militia, which are mostly Christian. In addition, the Lord's Resistance Army (LRA) continues to operate in the south-eastern part of the country. 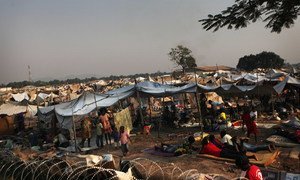 Secretary-General Ban Ki-moon has appointed a panel to investigate the response of the United Nations to allegations of sexual abuse surrounding a deployment of foreign military forces in the Central African Republic (CAR), a spokesperson for the Organization has announced.