WHO Yemen
WHO and the Cleaning and Improvement Fund in Yemen have launched a cleanup campaign targeting Al-Tahrir and Maen districts, the two most populated areas in Sana’a, where tons of garbage continue to accumulate.
23 June 2015

Thousands of suspected cases of the mosquito-borne viral infection Dengue fever have been reported in conflict-ravaged Yemen, where a major health crisis is unfolding, the United Nations World Health Organization announced today.

WHO spokesman Christian Lindmeier told reporters at UN headquarters in Geneva that more than 3,000 suspected cases of Dengue had been reported in Yemen since March 20 with some non-governmental organizations flagging more than 6,000 cases.

The latest development comes just days after WHO said Yemen’s health system is on the verge of breakdown. Hospitals have been destroyed, health workers killed and critical shortages of food, medical supplies and fuel are causing large-scale suffering, and it is only thanks to the heroic efforts of the country’s health workers, the resilience of its brave people and the tireless efforts of national and international humanitarian organizations that any semblance of health care is being provided.

In addition, the UN Office for the Coordination of Humanitarian Affairs (OCHA) report that health kits, IV fluids and other essential medicines have been delivered to health facilities in four governorates in Yemen in the past week, for the treatment of more than 438,000 people, including treatment of patients with dengue fever.

In Geneva today, the WHO spokesman said that Dengue fever in Yemen followed a seasonal pattern with a high number of cases being reported between April and August annually, but the conflict had led to a large increase in the number of cases reported this year.

The current crisis in Yemen had severely impacted access to water, sanitation, preventive and clinical services, and shelter in many governorates that has led to an increased risk of disease outbreaks, particularly among the internally displaced people and the large segments of the population affected by the crisis, according to Mr. Lindmeier.

“Hundreds of cases were expected in Aden alone in the coming weeks,” he said.

He also said that access to care had been severely impacted with a nearly 50 percent drop in consultations since the conflict began in 2015.

WHO said that together with Yemen’s Ministry of Health, they have developed an outbreak control and response strategy for the suspected Dengue cases, which included measures such as strengthened laboratory capacity, the provision of bed nets, insecticide and spraying equipment, and transportation and implementation.

However, “access was the biggest challenge,” Mr. Lindmeier said.

Dengue fever is a severe, flu-like illness that affects infants, young children and adults, but seldom causes death, according to a WHO factsheet, which also says there is no specific treatment for dengue fever but early detection and access to proper medical care lowers fatality rates below 1 per cent. 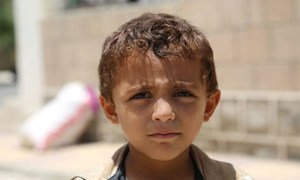 The United Nations relief arm has called for over one billion dollars in funding in order to lift Yemen from a devastating crisis that has plunged the country into severe food insecurity and left it on the brink of an all-out humanitarian disaster, the Organization today confirmed, as national stakeholders from the Gulf state wrapped up UN-backed political consultations in Geneva, Switzerland.