OCHA/Charlotte Cans (Sana’a, June 2015)
Since March 2015, conflict has wracked the lives of millions of families in Yemen, and there are now close to 13 million people without adequate access to food – 2.3 million more in just 3 months.
19 June 2015

The United Nations relief arm has called for over one billion dollars in funding in order to lift Yemen from a devastating crisis that has plunged the country into severe food insecurity and left it on the brink of an all-out humanitarian disaster, the Organization today confirmed, as national stakeholders from the Gulf state wrapped up UN-backed political consultations in Geneva, Switzerland.

Speaking at the launch of the $1.6 billion appeal in Geneva earlier this morning, UN Under-Secretary-General for Humanitarian Affairs and Emergency Relief Coordinator, Stephen O'Brien, told delegates that as fighting intensified across Yemen, the country faced “a looming humanitarian catastrophe” with people across the country struggling to feed their families and basic services collapsing in all regions.

“Millions of families no longer have access to clean water, proper sanitation or basic healthcare,” Mr. O'Brien warned. “Deadly diseases such as dengue and malaria have broken out, and supplies for acute trauma care are running dangerously low.”

According to a recent joint survey released by the UN Food and Agriculture Organization (FAO) and the World Food Programme (WFP), six million people in Yemen are slipping towards severe hunger and now need emergency food and life-saving assistance, a sharp increase from the last quarter of 2014. In addition to the population facing a food security 'emergency,' over 6.5 million people are classified as facing a food insecurity security 'crisis.'

Meanwhile, the study added, ten out of Yemen's 22 governorates are now classified as facing food insecurity at 'emergency' level. Millions more are highly vulnerable and could easily fall into emergency levels unless there is a dramatic improvement in the availability and access to food at prices that most people can afford.

The humanitarian stresses brought on by the conflict, however, have only compounded the already severe human toll of the fighting.

The UN's Office for the Coordination of Humanitarian Affairs (OCHA), which Mr. O'Brien heads, has noted that thousands of people in the country have been killed and injured by airstrikes and ground fighting in the last three months alone while over 1 million people have fled their homes. In addition, a staggering 80 per cent of the Yemeni population currently need humanitarian assistance.

“The disregard for international humanitarian law by parties to the conflict has come with a high human toll,” Mr. O'Brien continued. “There is also an urgent need for full resumption of commercial imports as reductions have crippled the country, putting millions at risk.”

OCHA's new appeal – a revision of its 2015 Humanitarian Response Plan – will seek to deliver essential protection and lifesaving assistance, including food, water and shelter, to Yemen's most vulnerable, or an estimated 11.7 million people.

“While this plan allows us to relieve the dire human suffering in Yemen, it alone is not enough to end the living nightmare faced by so many families,” the OCHA chief concluded. “Only a political solution to the Yemen crisis can end the unacceptable and intolerable level of suffering.”

To that point, Yemeni stakeholders convened this week in Geneva to attend UN-facilitated consultations aimed at finding a peaceful way out of the conflict.

Addressing reporters at a press briefing this afternoon to mark their conclusion, the UN Special Envoy for Yemen, Ismail Ould Cheikh Ahmed, explained, however, that the consultations were “not an end in themselves but the launch of a long and arduous path.”

Nevertheless, he said, there was optimism that specific goals, including the imposition of a humanitarian ceasefire, could be achieved.

“There has been positivity in responding to the invitation, coming to Geneva, responding to the UN Security Council resolution and the ceasefire accompanied by a withdrawal so there are things on which we can build,” continued Mr. Ould Cheikh Ahmed.

“We don't want to hold another meeting. We thought it would be better now to get back to shuttle diplomacy,” he added. “The humanitarian situation cannot wait anymore. It must be dealt with urgently. That's why we need a humanitarian pause – that's the priority.” 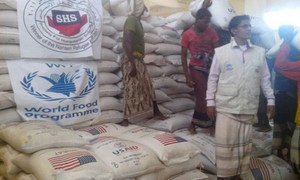 Six million people in Yemen are slipping towards severe hunger and now need emergency food and life-saving assistance, “a sharp increase” from the last quarter of 2014, according to a new joint study by two United Nations organizations.