The United Nations Mission in South Sudan (UNMISS) has expressed growing concern about “continuing and consistent reports” emanating from two north-eastern counties regarding a surge in kidnappings and rapes and an overall uptick in violence, which has forced the UN and other aid agencies to withdraw staff from the region.

According to credible information collected by the UN Mission, numerous towns and villages in Guit and Koch counties, located in Unity state, have been reported as “burned” amid killings, abductions of males as young as 10 years of age, rape and abduction of girls and women, and the forced displacement of civilians.

The Mission added that it had experienced “exceedingly limited access to the affected areas” as well as “increasingly aggressive” behaviour toward UN staff from soldiers at checkpoints which, it said, would appear to reflect “a lack of control by local authorities over security checkpoints.”

South Sudan has been in the grip of conflict since December 2013 – a conflict marked by brutal violence against civilians and deepening suffering across the country. The major humanitarian consequences are widespread displacement due to the violence, including high rates of death, disease, and injuries, severe food insecurity and disrupted livelihoods, and a major malnutrition crisis.

Some 119,000 people are sheltered in UNMISS compounds across the country while the Organization estimates that the number of people in need for 2015 will include an anticipated 1.95 million internally displaced persons (IDPs) and a projected 293,000 refugees.

The UN estimates that 13,000 children are associated with armed forces and groups nationwide in South Sudan, with credible evidence indicating that both of the warring parties have engaged in the recruitment of child soldiers since the current conflict began in December 2013.

Adding her voice to the statement, Ellen Margrethe Løj, Special Representative of the UN Secretary-General and head of UNMISS, reminded the parties to the conflict of their “obligation to abide by international human rights and humanitarian law” and urged them to take “all measures not to harm civilians and guarantee the safety of international aid organizations and United Nations personnel and assets.”

“There is no legitimate reason to burn civilian homes, or target civilian girls, boys, women or men through violence, including sexual violence,” Ms. Løj concluded.

At the same time, the Humanitarian Coordinator in South Sudan, Toby Lanzer, warned that ongoing hostilities in Unity state had now obliged all non-governmental organizations and UN agencies to evacuate staff, bringing relief efforts south of the town of Bentiu to a grinding halt.

As a consequence, he added, over 300,000 civilians in need of emergency relief, including food aid and medical services, remained devoid of any “life-saving assistance.”

Moreover, the renewed violence comes at a time when regional food stocks remain depleted and at the height of the planting season when civilians could be planting crops for later in the year.

“Aid agencies are committed to returning to all areas of southern Unity and continuing emergency operations there as soon as it is safe for them to do so,” Mr. Lanzer continued. “I therefore call for assurances from the parties to the conflict that the work of aid agencies on behalf of populations in need, based on the principles of humanity, impartiality and neutrality, can continue without delay.” 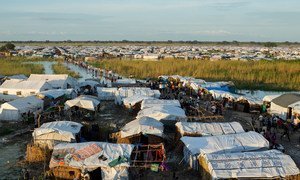 The number of internally displaced persons seeking refuge with the United Nations Mission in South Sudan (UNMISS) has grown to 53,000 following the latest bout of fighting in the African country, a spokesperson for the Organization has confirmed.