21 April 2015
A group of United Nations independent experts today welcomed a recent decision made by the Supreme Court of Pakistan to suspend death sentences imposed by military courts.

In a statement released today by the Office of the UN High Commissioner for Human Rights (OHCHR), the experts said they had previously expressed concern at an earlier decision by Pakistan to rescind its unofficial six-year moratorium on the death penalty for non-military personnel in terrorism-related cases.

“Terrorism attacks should not prevent States from complying with the stringent requirements of international law for the imposition of the death penalty,” the independent experts noted.

International law requires that the death penalty may be imposed only in the context of a stringent functioning of the law and order system, so as to ensure the highest respect of due process and fair trial guarantees for the defendants.

“Only full respect of these guarantees distinguishes capital punishment as possibly permitted under international law from an arbitrary execution,” the experts stressed. “The administration of justice through military tribunals raises serious questions, particularly in terms of access to justice, independence and impartiality of the court, and respect for the fair trial rights of the accused.”

The experts, known as Special Rapporteurs are part of the ‘Special Procedures’ of the Human Rights Council, which is the general name of the Council’s independent fact-finding and monitoring mechanisms that address either specific country situations or thematic issues in all parts of the world.

Among the experts, who work on an individual, voluntary, unpaid basis and are not UN staff, were the Special Rapporteurs on the promotion and protection of human rights and fundamental freedoms while countering terrorism; on extrajudicial, summary or arbitrary executions; and on the independence of judges and lawyers. The Chair-Rapporteur of the Working Group on arbitrary detention and the Chair of the Working Group on enforced or involuntary disappearance were also part of the team.

They said that using military tribunals to try civilians in the name of national security, a state of emergency or counter-terrorism, runs against all relevant international and regional human rights standards and established case law.

“Military tribunals should have jurisdiction only over military personnel who commit military offences or breaches of military discipline,” they said. “And then only when those offences or breaches do not amount to serious human rights violations, and they should never have the power to impose the death penalty.”

They stressed that they had repeatedly called on States to assess whether the use of the death penalty is compatible with the right to life, as well as the inherent dignity of the human person, and to consider if the severe mental and physical pain or suffering it causes could constitute a violation of the absolute prohibition of torture.

“We hope that the decision of the Supreme Court will provide an opportunity for all relevant actors in Pakistan to pursue a critically important dialogue aiming to address the questions relating to the legality of military tribunals, and the use of the death penalty, in line with Pakistan’s international human rights obligations,” the experts said, stressing that ensuring a safe environment for judges, prosecutors, lawyers and other members of the justice system is of fundamental importance. 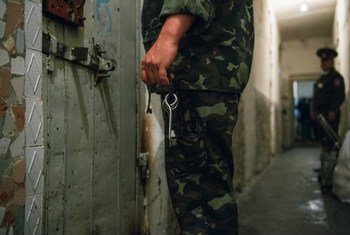 20 March 2015
A group of independent United Nations human rights experts welcomed the last-minute decision by the Pakistani authorities to postpone the hanging of Shafqat Hussain, who was convicted as a minor, while calling on them to halt the execution altogether.