Depriving children of their childhood and their freedom is “the biggest crime against humanity,” child rights activist and Nobel Peace Prize winner Kailash Satyarthi said today during a visit to United Nations Headquarters in New York.

In an interview with the UN News Centre, Mr. Satyarthi welcomed the momentum gained in the struggle to eradicate child labour and child slavery since his awarding of the 2014 Nobel Peace Prize, voicing optimism that the fight would ultimately be a successful one.

“The very first few hours following the announcement of the Nobel Peace Prize in October brought so much attention to the world about the plight of the most exploited, most neglected children on the planet. That hadn’t happened in all my life,” he explained.

“Suddenly, the whole issue of child slavery, child labour, education for children, child violence, and things like that, appeared in the global discussion.”

Mr. Satyarthi, who was awarded the Nobel Peace Prize along with renowned activist Malala Yousafzai for their work in championing children’s rights around the world, cited a feeling of moral responsibility as propelling him to address the issue of children’s rights “at the next level.”

“All children are our children and we have to react,” he said. “I cannot wait because childhood cannot wait.”

According to the UN International Labour Organization (ILO), the number of children in child labour worldwide has declined significantly since 2000, from 246 million to 168 million, with more than half of them (an estimated 85 million) engaged in hazardous work such as mining.

Mr. Satyarthi attributed much of the successes on the ground to the cumulative impact and efforts of civil society organizations, governments, UN agencies, businesses and society as a whole. Compassionate consumers, he noted, also helped drive awareness and deliver the message that child labour is no longer acceptable.

Despite the successes on the ground, however, the Nobel laureate urged “a much bigger push,” warning that a “whole generation would be lost if we don’t act now.”

“I am very confident that we are going to be able to put an end to child slavery and child labour. And that is going to happen in my lifetime. So I am very optimistic about it,” he added. “We cannot call ourselves civilized if one single child is living in slavery anywhere in the world.”

♦ Receive daily updates directly in your inbox - Subscribe here to a topic.
♦ Download the UN News app for your iOS or Android devices.
child labour 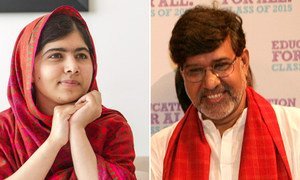