Noting the Government’s plan to install about 100 gigawatts of solar power across the country by 2022, Mr. Bloomberg pointed to the major development benefits that the country could achieve, given the large amount of solar radiation it gets and the reduced level of infrastructure needed to pump solar energy into people’s homes.

“Imagine the signal it would send to the world if India were able to achieve its goal of bringing electricity to every household that lacks it, largely using clean solar power – at a fraction of the cost of the conventional grid.,” said the Special Envoy during his keynote address to the ‘RE-Invest’ conference, aimed at scaling-up financing for renewable energy. “It would be a success story told – and copied – around the world.”

Mr. Bloomberg joined leading renewables and investment professionals from India and across the world at the RE-Invest conference, as part of a two-day visit to the country in which he advocated for increased renewables, smarter cities, sustainable transport and urban climate adaptation.

He arrived at the Conference in a rickshaw powered by compressed natural gas, which is a far cleaner alternative to the fuels that make Delhi one of the most polluted cities in South Asia. He noted that most of the world’s total carbon emissions stem from cities and sources like buildings, transportation and waste, over which at least limited control can be exerted.

“Steps to make those systems more efficient also make cities better places to live,” he said, stressing the difference such investments could make. “In New York City, we were able to reduce our carbon footprint by 19 percent in just six years while also making our air cleaner than it has been in more than 50 years, increasing life expectancy by three years, and leading the U.S. in creating new jobs. And India can do the same for its citizens.”

Mr. Bloomberg, who was mayor of New York for 12 years, said that those gains came not in spite of investments in sustainability but because of them and he stressed that the most effective economic policies for India would be those that improved people’s health and quality of life.

“The fact is: People want to live in cities with clean air and water, good public transportation, and streets that are safe for walking and biking. And where people want to live, businesses want to invest,” he said. “The good news is, as Prime Minister Modi is showing, confronting climate change goes hand-in-hand with smart economic growth. And from my experience, he is absolutely correct to make cities a central focus of his work.”

With countries coming to Paris this December to reach a new climate change agreement, Mr. Bloomberg said that no country will commit to goals they don’t think they can reach, or that come at too great a cost to economic growth. However, countries are continuing to move forward because they realise the benefits of action – for their economies and the health of their citizens.

“India’s leadership is helping to show other countries how much is possible – by showing that clean-energy, climate-resilient growth is the path to a brighter future,” Mr. Bloomberg said. “We’re all in this together, and we have a great deal to learn from one another.” 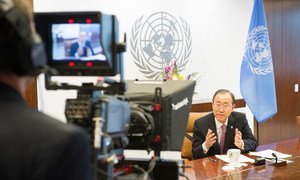 Speaking via video message to the Delhi Sustainable Development Summit organized by The Energy and Resources Institute (TERI) of India, the United Nations Secretary-General Ban Ki-moon today called for countries to take a low-carbon approach to development in the coming years.