UNHCR
Even as global attention fades, the humanitarian crisis in eastern Ukraine is deteriorating.
30 January 2015

The United Nations in Ukraine is alarmed over the deteriorating humanitarian situation in the eastern part of the country, where heavy fighting has intensified in recent days, and is calling for an immediate cessation of hostilities to allow aid to reach civilians.

The situation is especially precarious in Debaltseve, Horlivka, and other densely populated areas in the country's restive east, where fighting has intensified between government forces and armed opposition groups.

According to the UN's Humanitarian Coordinator in the country, of the 300,000 original inhabitants of Debaltseve and Horlivka, some have managed to escape the violence, but many civilians remain stranded in these hard-to-reach areas.

“The need for humanitarian assistance is real, it is urgent,” said UN's Humanitarian Coordinator Neil Walker in a note from his office.

Reports indicate that every day some 30 to 60 emergency cases are being referred to Horlivka hospital, where doctors are still performing some surgical operations but at reduced scale due to constant shelling, he said. “This makes it increasingly difficult to deliver essential life-saving assistance to the affected population and of course for civilians to find safety.”

“Unfortunately we continue to receive credible reports indicating that military positions are dangerously close to densely populated areas and close to social premises, including hospitals, schools, orphanages, elderly homes: even one shell in these areas can cause huge damage and casualties among the civilian population,” Mr. Walker said.

The Humanitarian Coordinator urged an immediate humanitarian truce to enable civilians to leave if they wish, for aid workers to assist affected communities, and to allow safe evacuation of the injured and the peaceful civilian population.

Indiscriminate shelling of civilians violates international humanitarian law and must stop, he emphasized.

In late February 2014, the situation in Ukraine transcended what was initially seen as an internal Ukrainian political crisis into violent clashes in parts of the country, later reaching full- scale conflict in the east. Despite the Minsk cease-fire, the situation in Ukraine has since continuously deteriorated, with serious consequences for the country's unity, territorial integrity and stability. 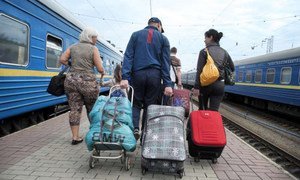 While the fragile month-long ceasefire in eastern Ukraine is a welcome step towards ending the conflict, armed groups continue to terrorize the population in areas under their control, pursuing killings, abductions, torture, ill-treatment and other serious abuses, the United Nations Human Rights Office said today as it released its latest report on the situation in the country.