UNHCR/I. Zimova
A Ukrainian family with their belongings after arriving at Kyiv by train. They had fled the violence in eastern Ukraine.

8 October 2014
While the fragile month-long ceasefire in eastern Ukraine is a welcome step towards ending the conflict, armed groups continue to terrorize the population in areas under their control, pursuing killings, abductions, torture, ill-treatment and other serious abuses, the United Nations Human Rights Office said today as it released its latest report on the situation in the country.

“Further prolongation of this crisis will make the situation untenable for the millions of people whose daily lives have been seriously disrupted,” UN High Commissioner for Human Rights Zeid Ra’ad Al Hussein said in a statement from his Office on the release of the report.

“For almost half a year, residents of the areas affected by the armed conflict have been deprived of their fundamental rights to education, to adequate healthcare, to housing and to opportunities to earn a living.”

The 6th monthly report of the 35-strong UN human rights monitoring mission in Ukraine covers the period from 18 August to 16 September. It notes that between 24 August and 5 September, armed groups of the self-proclaimed ‘Donetsk people’s republic’ and ‘Luhansk people’s republic’ were bolstered by an increasing number of foreign fighters, including citizens believed to be from Russia.

The report also found that while there has been an absence of large-scale offensive actions since the ceasefire was announced on 5 September, in some areas, artillery, tank and small arms exchanges have continued on an almost daily basis. Armed groups also destroyed housing and seized property. There have also been continued allegations of human rights violations committed by some volunteer battalions under Government control.

Between 24 August and 5 September, there was also a sharp increase in detentions by the armed groups, and there were alarming reports of torture and ill-treatment of detainees, including mock executions and sexual violence. There were also reports of ill-treatment of those detained by Ukrainian armed forces and police.

“With the shift in control of territory during the reporting period between Government forces and the armed groups, the risk of reprisals against individuals for collaborating with ‘the enemy’ or for such perceived collaboration has increased,” the report notes.

“This is a call for justice, not retribution. All parties must ensure that there are no reprisals for perceived collaboration or affiliation with an opposing camp,” the High Commissioner said, referring to the report’s documentation of increased tensions between residents and IDPs.

Meanwhile, in the Autonomous Republic of Crimea, the human rights situation continued to be marked by multiple and ongoing violations, the report notes, including the curtailment of the freedoms of expression, peaceful assembly, association, and of religion or belief, and increasing intimidation of Crimean Tatars under the pretext of combating extremism. 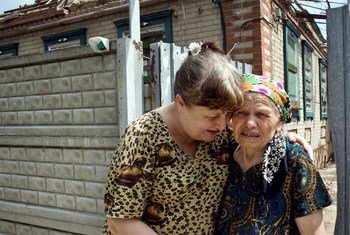 3 October 2014
The United Nations Secretary-General Ban Ki-moon is “saddened and disturbed” to learn of the death of an international humanitarian aid worker, killed when a shell landed near the International Committee of the Red Cross Headquarters in eastern Ukraine on Thursday.