Growing radicalization, fundamentalism and extremism demand a renewed emphasis of Mahatma Gandhi's ideals – both spiritual and political, Secretary-General Ban Ki-moon said in Gujarat today, pledging the onging commitment of the United Nations to promote tolerance, and ensure justice and dignity for all.

Growing radicalization, fundamentalism and extremism demand a renewed emphasis of Mahatma Gandhi's ideals – both spiritual and political, Secretary-General Ban Ki-moon said in Gujarat today, pledging the ongoing commitment of the United Nations to promote tolerance, and ensure justice and dignity for all.

“Divisive politics and sectarian incitement have no place in our modern world. As Gandhi reminded us, 'There will be no lasting peace on earth unless we learn not merely to tolerate but even to respect the other faiths as our own,'” said Mr. Ban in remarks at Sbarmati Gandhi Ashram, which houses a library and museum chronicling the life, work, and teachings of the legendary leader of India's independence movement and pioneer of the philosophy and strategy of non-violence.

Indeed, continued the Secretary-General, there is great strength in diversity – and countries that celebrate diversity and embrace every single individual are the ones to shape a secure and stable world, and he looked to India – “a large, diverse and vibrant democracy – to be a champion of the rights, dignity and equality of all people.”

Mr. Ban said that like so many people around the world, he has long admired Mahatma Gandhi and has been personally guided by his teachings, especially his description of “Seven Social Sins”: politics without principles; wealth without work; pleasure without conscience; knowledge without character; commerce without morality; science without humanity; and worship without sacrifice.

“This vision transcends all borders. Gandhi's compassion embraces all people. I myself have been putting in my best efforts and asking all leaders, far and wide, to live by his teachings,” said Mr. Ban, adding that Gandhi's emphasis on the poor is reflected today in the work of the United Nations to end poverty and build a peaceful world of dignity for all.

“We will succeed only if the memory of Gandhi's unyielding fight against injustice burns bright in our hearts,” he said, noting that the United Nations marks Gandhi's birthday as the International Day of Non-Violence – “and we defend his ideals every day of the year.”

Touching on Gandhi's inspiring and enduring legacy, Mr. Ban said that he would never forget seeing well-worn copies of Gandhi's books at an exhibition of the papers of Dr. Martin Luther King, Jr. “Nelson Mandela also deeply admired Gandhi. Mandela said Gandhi symbolized hope that when all South Africans are treated as equals, the country would be at peace.”

“The same holds true for our world,” said the Secretary-General, emphasizing: “Mahatma Gandhi preached and followed the message of peace, non-violence and communal harmony. It is a common value that the United Nations promotes and asks leaders near and far to put into practice – from here in Gujarat to the world.”

The ashram is one of the first stops on his three-day visit to India, and later in the day, as he addressed the 7th Vibrant Gujarat Summit, a bi-annual event that brings together political and business leaders, investors, and corporations, Mr. Ban expressed the hope that the participants and all the world's people would be inspired by Gandhi's vision and teachings.

He also stressed that 2015 must be a year for global action. “We must change course if we are to avoid even greater damage to ourselves and to our planet,” said Mr. Ban, explaining that like the gathered leaders, he too must emphasize the importance of his mandate, and, as UN Secretary-General, he must spotlight 2015 as “most important and crucial for humanity.”

This is because there are three important priorities that must be achieved during the year, which also marks the 70th anniversary of the founding of the United Nations: making the final push to achieve the landmark UN Millennium Development Goals (MDGs); crafting a post-2015 development agenda with a set of sustainable development goals; and agreeing on a universal and meaningful climate change agreement in December in Paris.

With all this in mind, the Secretary-General said the world had a very important enabling factor that would help in reaching those objectives: the upcoming UN conference on financing for development, set to be held in July in Addis Ababa, Ethiopia. That and other meetings throughout the year would aim at mutually reinforcing goals: to map out a new era of development that strengthens equity and fosters inclusive growth and climate action.

On the margins of the Summit, the Secretary-General met with Indian Prime Minister Narendra Modi. Mr. Ban thanked India for its significant contribution to UN peacekeeping operations, as well as to the Organizations conflict prevention and humanitarian efforts. The two also discussed, among others, the need for action on climate change, the post-2015 development agenda, and regional issues.

The UN chief also met with United States Secretary of State John Kerry, and the two leaders discussed international peace and security issues, including UN efforts to address the crisis in Libya, the urgency of returning to negotiations to achieve a two state solution to the Israeli-Palestinian conflict, and the need for progress on nuclear disarmament of the Korean Peninsula.

Also today, Mr. Ban inaugurated in Gujarat the Canal Top Solar Power Plant, where, looking out over the massive facility, he said: “I saw more than glittering panels – I saw the future of India and the future of our world. I saw India's bright creativity, ingenuity and cutting-edge technology. And I saw the leadership on sustainable development of Prime Minister Modi when he was the Chief Minister in Gujarat.”

Speaking to reporters, the UN chief commended India for having made significant strides in meeting MDG targets, particularly in lifting hundreds of millions of people out of poverty, in eliminating polio, and in reducing child and matrernal mortality. “But…we have to admit, that most of the developing countries have not fully accomplished the [Goals].”

“That's why the Member States are now very seriously working to find another set of goals, what we [call] the sustainable development goals. These…goals [are] aiming to address three dimensions of the world and our lives – the economic dimension, social dimension and environmental dimension. [They] cover all spectrums of our lives,” he said, noting that Member States are shortly set to begin final negotiations on the new taregts in the months leading up to a major UN summit in September 2015. 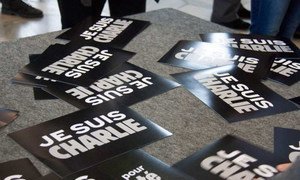 Making an impassioned appeal for tolerance, United Nations Secretary-General Ban Ki-moon today called for understanding among all communities to heal the tensions within societies – a particularly poignant plea following yesterday's horrific attack on the staff at French satirical magazine Charlie Hebdo, and in the face of ongoing sectarian violence across Africa's Sahel region being fuelled by Boko Haram.