8 January 2015
Making an impassioned appeal for tolerance, United Nations Secretary-General Ban Ki-moon today called for understanding among all communities to heal the tensions within societies – a particularly poignant plea following yesterday's horrific attack on the staff at French satirical magazine Charlie Hebdo, and in the face of ongoing sectarian violence across Africa's Sahel region being fuelled by Boko Haram.

“In far too many places, we have seen acts of extremism, unspeakable brutality and a deeply worrying escalation of tensions between communities and within societies. Addressing this discord in a manner that solves, rather than multiplies, the problem may be the greatest test our human family faces in the 21st century,” Mr. Ban told reporters at UN Headquarters.

The Secretary-General's appeal came after his informal briefing to the 193-Member UN General Assembly, where he launched the Organization-wide campaign for broad based action in 2015 to wrap up the unfinished business of the Millennium Development Goals (MDGs) and outline a new global agenda centred on people and the planet, and underpinned by human rights.

“All of us were deeply moved by the many images from yesterday's despicable attack in Paris. Perhaps none was as horrifying as that of a French policeman ruthlessly executed on a sidewalk,” said the Secretary-General, adding: “We now know that policeman's name. He was Ahmed Merabet. He himself was a Muslim.”

The attack, continued Mr. Ban, in which 10 media workers and two police officers were killed by masked gunmen who ransacked the offices of Charlie Hebdo, “is yet another reminder of what we are facing together.”

“It should never be seen as a war of religion … for religion … or on religion. It is an assault on our common humanity, designed to terrify and incite. Giving in to hatred and sowing division only guarantees a spiral of violence – precisely what terrorists seek. We must not fall into that trap," he declared.

“I want to make a special appeal for tolerance and understanding,” he said, stressing: “We need to find a way to live together, in peace, in harmony, in full respect of universal human rights and fundamental freedoms.”

As Nigeria readies for its election next month, the Secretary-General said the world faces another grave test. Boko Haram has continued its violence, killing Christians and Muslims, kidnapping even more women and children, and destroying churches and mosques. Mayhem has spread across the region, and is now having a direct impact on Cameroon and other countries.

“I urge Boko Haram's leaders to end the destruction of so many lives and communities, and immediately and unconditionally release the kidnapped school girls and all others. The international community cannot let human rights abuses continue with impunity,” he declared.

“This is my personal appeal. As a father and grandfather and as Secretary-General, I will continue to actively explore with Member States what more can be done,” he concluded. 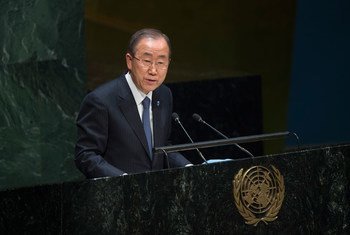 8 January 2015
Secretary-General Ban Ki-moon looked forward to a “year of opportunity,” as he briefed the 193-Member United Nations General Assembly on his priorities for 2015, and called for transformative global action that would ensure sustainable development and human dignity for all.