The conflict in South Sudan has seriously hampered the protection of children, increasing their vulnerability dramatically, says a new report published this week by United Nations Secretary-General Ban Ki-moon.

The first report of the Secretary-General on children and armed conflict in South Sudan documents grave violations of children’s rights committed since the African nation seceded from Sudan in 2011.

More specifically, it takes stock of how children have been affected by the conflict during the period from 1 March 2011 to 30 September 2014, documenting the following six grave violations committed against children: killing and maiming, recruitment and use, sexual violence, abduction, attacks against schools and hospitals, and denial of humanitarian access.

During the period between December 2013 and September 2014 over 600 children were killed, the report says. During the same period, thousands of child soldiers were seen with State and non-State armed groups.

“The data collected and verified by the UN is devastating,” Leila Zerrougui, the Special Representative of the Secretary-General for Children and Armed Conflict said in a statement released today by her Office.

“The children of South Sudan were not only affected by renewed violence, they have been directly targeted by all parties to the conflict,” she added.

The UN also found that dozens of cases of boys and girls who were victims of sexual violence committed by all parties to the conflict, although the actual number is likely to be higher due to underreporting. Schools and hospitals were targeted as well.

All parties to the conflict in South Sudan were responsible for grave violations against children during the reporting period, including killing and maiming, recruitment and use, abduction and rape and other forms of sexual violence, the report found.

“Six months later, we are still waiting to see boys and girls released and other meaningful actions that will help shield the country’s children from the violence,” the Special Representative said, referring to the mid-2014 pledge by the Sudan People’s Liberation Army (SPLA) and other parties to end and prevent the use of children as well as all grave violations against children.

To that end, the report called on the Government of South Sudan to develop a disarmament, demobilization and reintegration programme for children separated from armed forces and groups. This programme should be designed to ensure that children receive adequate support and reintegration assistance, with particular attention to the specific needs of girls.

Additional recommendations to end and prevent grave violations against children are outlined in the report such as ending impunity for perpetrators. 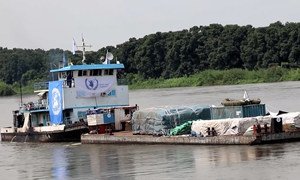 A barge carrying a shipment of food destined for thousands of people in South Sudan has crossed over from neighbouring Sudan, reopening a long-closed river corridor along the Nile, the United Nations World Food Programme (WFP) announced today.