Security Council extends UN mission in South Sudan through May 2015

UNMISS
A peacekeeper with the UN Mission in South Sudan (UNMISS).
25 November 2014

In an adopted resolution, the Council decided to extend the Mission until 30 May 2015.

In doing so, the Council authorized, as it had previously, UNMISS to use all necessary means to protect civilians, monitor and investigate human rights, create the conditions for delivery of humanitarian assistance, and support the implementation of the cessation of hostilities agreement.

The Council also requested UNMISS to focus and streamline its activities, across its military, police and civilian components, in order to achieve progress on the above-mentioned tasks, and recognized that certain Mission tasks will therefore be ceased.

In addition, in the resolution the Council also demanded that the Government of South Sudan and all relevant parties fully cooperate in UNMISS deployment, operations and monitoring, verification and reporting functions.

Further, the resolution calls upon the Government of South Sudan to ensure freedom of movement for internally displaced persons, including those leaving and entering protection of civilian sites, and to continue to support UNMISS by allocating land for such sites.

The authorized troop and police strengths of the Mission will remain 12,500 and 1,323, respectively, as was decided by the Council in late December 2013, after political in-fighting between President Salva Kiir and former Vice President Riek Machar turned into a full-fledged conflict that has sent nearly 100,000 civilians fleeing to UNMISS bases around the country. The crisis has uprooted some 1.5 million people and placed more than 7 million at risk of hunger and disease. 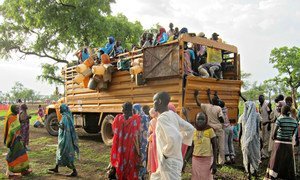 The United Nations Security Council this evening voiced alarm and outrage at the eruption of hostilities in South Sudan over the past week which left numerous civilians dead and injured and placed increasing pressure on the country’s already overwhelming humanitarian crisis.