Following the end of a four-day mission to Ethiopia, a senior United Nations relief official has called for continued international attention to the plight of South Sudanese refugees, warning that the number of refugees could rise substantially if fighting in South Sudan persists.

In a press release issued today by the UN Office for the Coordination of Humanitarian Affairs (OCHA), Assistant Secretary-General for Humanitarian Affairs, Ms. Kyung-wha Kang, noted that nearly 194,000 South Sudanese refugees – 90 per cent of them women and children – have arrived in Ethiopia since the conflict in South Sudan began this past December.

“Without a political solution, and with more fighting and major food security challenges in South Sudan, that number could rise to 350,000 by the end of the first quarter of 2015,” she warned.

On Saturday, Ms. Kang travelled to the Gambella region in western Ethiopia, where she met refugees from South Sudan in Tierkidi camp. Ethiopia currently hosts more than 600,000 refugees, the largest refugee population in Africa.

Noting that she was impressed by the collaborative efforts of the Ethiopian Government’s Administration for Refugee and Returnee Affairs, the UN refugee agency (UNHCR) and humanitarian partners, she emphasized that current funding is not enough to ensure that all refugees receive humanitarian assistance and services.

She also stressed that while the South Sudanese refugee crisis in western Ethiopia is the newest emergency in the country, the plight of Eritrean and Somali refugees must also “be kept on the radar.”

“I thank the people and Government of Ethiopia for their generosity in welcoming refugees from neighbouring countries and for their tireless efforts to respond to people’s needs,” Ms. Kang said.

“But much more financial resources are needed. I urge the international community to match the generosity of Ethiopian and other countries hosting South Sudanese refugees with funds needed to support the South Sudan refugee appeal,” she added.

During her visit, the humanitarian official also spent two days in Addis Ababa meeting members of the Ethiopia Humanitarian Country Team and representatives from non-governmental organizations.

Ms. Kang also met with Mitiku Kassa, the State Minister of Agriculture, and discussed the need to increase longer-term development and invest in community resilience to reduce chronic humanitarian needs.

In addition, Ms. Kang met the Deputy Chairperson of the African Union Commission and Principals of the Intergovernmental Authority on Development (IGAD) and discussed humanitarian challenges facing the Horn of Africa.

Political in-fighting between South Sudan President Salva Kiir and his former deputy, Riek Machar, started in mid-December 2013 and subsequently turned into a full-fledged conflict that has sent nearly 100,000 civilians fleeing to UNMISS bases around the country. The crisis has uprooted some 1.5 million people and placed more than 7 million at risk of hunger and disease.

♦ Receive daily updates directly in your inbox - Subscribe here to a topic.
♦ Download the UN News app for your iOS or Android devices.
South Sudan|Ethiopia 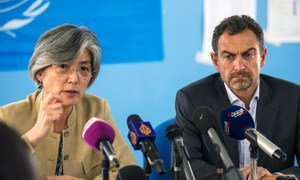 Concluding a three-day mission to South Sudan, a senior United Nations relief official has called on all parties to the conflict there to respect their ceasefire commitments, while urging the international community to continue providing support to enable humanitarians to scale up and expand critical aid operations.