IRIN/Katarina Höije
Police turned away patients at the Clinique Pasteur in Bamako, Mali, after the hospital was put under quarantine for the Ebola virus.

18 November 2014
The United Nations is intensifying its efforts to keep the Ebola outbreak from spreading in Mali by working to identify all chains of transmission and stepping up social mobilization campaigns to include a range of actors, from religious leaders to truck and bus drivers.

According to the UN World Health Organization (WHO), Mali has officially reported a total of 6 cases of Ebola, with 5 deaths. The virus was re-introduced into the country last month.

WHO is currently assisting the Government of Mali to identify and monitor contacts, and prevent the outbreak from growing. To date, 554 contacts have been identified and nearly all have been placed under surveillance.

The health agency’s focus will be to work closely with the Government to identify all potential chains of transmission and monitor the contacts so that everybody could be monitored for 21 days, after which, the transmission would hopefully stop, said WHO spokesperson Tarik Jasarevic.

The Ministry of Health, supported by WHO, has augmented the number of staff engaged in contact tracing by drawing on polio surveillance teams and using local medical students with training in epidemiology. The country is also ramping up its capacity to perform exit screening at the Bamako airport.

As the successful experiences in Senegal and Nigeria show, aggressive contact tracing, which seeks to find and break every chain of transmission, immediately after an imported case, can hold the number of additional cases to very small numbers and support a rapid end to the outbreak, UN spokesperson Stephane Dujarric told reporters at UN Headquarters.

The UN Children’s Fund (UNICEF) said meanwhile that it is working with Médecins Sans Frontières (MSF), the Malian Government and the Malian Health Ministry by increasing food and water delivery and improving hygiene and sanitation.

UNICEF spokesman Christophe Boulierac told reporters in Geneva that additional support to local clinics, particularly in the area close to the frontier with Guinea.

Mr. Boulierac also said social mobilization campaigns would include religious leaders, an awareness-raising plan for truck drivers in the region and the equipping of bus stations near the Malian capital of Bamako with hand-washing materials.

And the Head of the UN Mission for Ebola Emergency Response (UNMEER), Anthony Banbury, is today in Bamako to consult with national authorities and partners on the ground.

Meanwhile, WHO said that efforts to contain the outbreaks in West Africa are currently hampered by slow and complex diagnostic tests that impose a number of additional logistical challenges.

Currently, “each test requires a full tube of blood, takes from 2 to 6 hours, and costs around $100,” according to WHO. “These requirements are difficult to meet in resource-constrained West African settings, thus severely limiting testing capacity.”

Therefore, WHO has launched two urgent initiatives to stimulate diagnostic innovation and expedite the delivery of better and faster tests to West Africa; one aims to minimize the barriers faced by diagnostic companies to develop and deploy their tests, while the other comes with the establishment of an emergency quality assessment mechanism.

WHO’s Dr Pierre Formenty said in Geneva: “I hope that next six months, next year, we will have this test and it will help the control of this outbreak but also the detection of the outbreak outside west Africa in the rest of Africa.”

Further progress and outstanding needs will be discussed during a WHO expert consultation on innovative Ebola diagnostic tests to be held in Geneva in December, the UN health agency said.

WHO spokesman Tarik Jasarevic said also next month in Geneva, from 10 to 11 December 2014, the African Development Bank, the West African Health Organisation, the World Bank and the WHO will convene a meeting of health ministers, ministers of finance, non-governmental organizations, donors and international technical agencies to discuss how to make stronger the health systems of the Ebola-affected countries.

The objective will be to identify pragmatic solutions to strengthen health systems and ensure quality health services for the affected populations, and to ensure that those strengthened health systems would be better prepared to cope with future crises, the WHO spokesman said.

The affected countries already had insufficient numbers of qualified health workers when before the crisis started, and routine services, such as immunization and maternal health, had been severely disrupted, Mr. Jasarevic said.

“Governments ought to ensure that their Ebola responses are in line with the overall national health sector strategic plans and do not create parallel, segmented services,” he said. “Extraordinary response structures created during the current outbreak should be integrated in the existing primary health services.”

According to the WHO, as of November 11, 2014, a total of 14,413 Ebola cases have been reported in six countries (Guinea, Liberia, Mali, Sierra Leone, Spain, and the United States) and in two previously affected countries (Nigeria, Senegal) with 5,177 reported deaths. 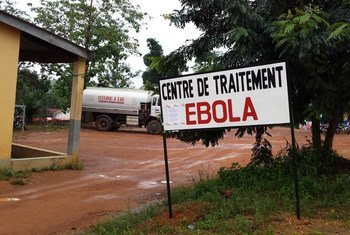 17 November 2014
The United Nations today praised the end of an outbreak of Ebola in the Democratic Republic of the Congo (DRC), as some of the world’s top football players, including Real Madrid’s Cristiano Ronaldo and Barcelona’s Neymar Jr, announced they are joining the Organization’s fight to help raise global awareness in the fight against the deadly virus.