The United Nations Security Council today adopted a resolution renewing the mandate for the UN Stabilization Mission in Haiti (MINUSTAH) in the Caribbean nation, urging political stakeholders in the country to fully commit to the democratic process and calling on international donors to strengthen their efforts in helping the Government.

In a resolution unanimously adopted this morning, the Security Council decided on the renewal of the MINUSTAH presence in Haiti for another year, until 15 October 2015, with the intention of further renewal, and reduced the Mission’s military presence in the country to 2,370 troops, down from 5,145, while keeping the police contingent unchanged at 2,601.

Through the text, the 15-member body reiterated that MINUSTAH’s efforts to strengthen the institutional and operational capacities of the Haitian National Police remained a “most critical task,” and recognized the “ownership and primary responsibility” of the Haitian Government “over all aspects of the country’s stabilization,” particularly against a background of “grave violations” committed by criminal gangs against children, women and girls and an overall arc of community violence.

“In the framework of the improvement of the rule of law in Haiti, strengthening the capacity of the Haitian National Police is paramount for the Government of Haiti to take timely and full responsibility for the country’s security needs, which is central to Haiti’s overall stability and future development,” the resolution stated.

At the same time, the texts strongly urged Haitian political actors “to work cooperatively and without further delays to ensure the urgent holding of free, fair, inclusive, and transparent” elections at the legislative, partial senatorial, municipal, and local levels.

The Haitian Parliament’s current mandate expires on 12 January raising concerns that “an institutional vacuum” would be created if voting is not held by the end of the year, as Sandra Honoré, the head of MINUSTAH, told the Council in a recent September briefing.

Today’s resolution calls upon MINUSTAH to support the political process and “to deliver and coordinate” electoral assistance to the Government.

The Council also acknowledged the important progress made by Haiti during the course of the year but admitted that the country continued to face “significant humanitarian challenges” with 85,432 internally displaced persons still living in camps where they face malnutrition and uneven access to water and sanitation.

The decision by the Council comes amid the UN’s ongoing effort to temper the continuing health and humanitarian crisis enveloping the country. Just last week, World Bank President Jim Yong Kim pledged $50 million ahead of the high-level conference on “Haiti: Clean Water, Improved Sanitation, Better Health,” co-hosted with UN Secretary-General Ban Ki-moon, to substantially improve water and sanitation coverage in Haiti, strengthen health services and contribute to the implementation of a project that will reach about 2 million people in rural Haiti.

Meanwhile, the United Nations has developed a two-year support plan to the Haitian National Plan to eliminate cholera and which focuses on four pillars: epidemiological surveillance; health promotion; medical treatment; and water, hygiene and sanitation.

According to the World Bank, about 38 per cent of Haitians lack access to safe drinking water, and only 24 percent of Haitian families has access to improved sanitation. Evidence shows that for every dollar invested in water and sanitation, seven dollars are gained in healthcare savings and productivity in Latin America and the Caribbean. This new initiative calls for concerted push for water and sanitation will help save lives and improve people’s health. 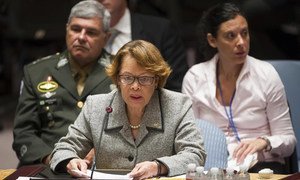 Amid continuing mistrust and disagreement over the electoral process in Haiti, a senior United Nations official today voiced deep concern over the political stalemate in the country.