Serious human rights violations, including torture, rape, and extrajudicial killings, dating to the period spanning 1971 to 1986 – the years when Mr. Duvalier, also known as “Baby Doc,” was in power – have been extensively documented by Haitian and international human rights groups.

Earlier this year, Haiti’s Court of Appeals reversed a January 2012 decision that stated that the former leader could not be charged with crimes against humanity which occurred during his reign because the statute of limitations had expired.

At a press briefing held in Geneva, a spokesperson for the Office of the UN High Commissioner for Human Rights (OHCHR) noted that while all the crimes were “obviously” not committed by Mr. Duvalier himself, it was imperative that the perpetrators of all abuses be brought to trial.

“It is the right of the Haitian people to obtain accountability for past violations of their human rights and the duty of mankind to remember, establish the truth and ensure justice for the victims,” OHCHR spokesperson Rupert Colville told reporters.

After years living in exile, Jean-Claude Duvalier’s return to Haiti in 2011 spurred victims and civil society organizations to seek justice for the abuses committed during his 15 years in office.

Mr. Duvalier died on 4 October of a reported heart attack. He was 63. 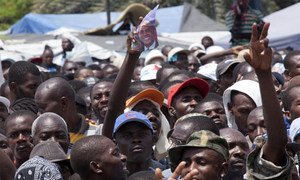