The United Nations Deputy High Commissioner for Human Rights said today that gross violations committed by all parties to the conflict in South Sudan have declined but the number of civilians forced to flee the violence now nears 2 million “with no likelihood that people will return to their homes soon.”

Referring to the damaging impact of the conflict on human rights across the country, including gross violations committed by all parties to the conflict, such as extra-judicial killings, enforced disappearances, rape, other forms of sexual violence, and attacks on hospitals and UN facilities, Flavia Pansieri noted that the scale and severity of reported violations had declined compared to the first months of the conflict.

“However, civilians have continued to bear the brunt of the ongoing armed conflict and of their leaders’ failure to stop the fighting,” she said in her remarks to a panel discussion on South Sudan held by the UN Human Rights Council in Geneva.

Both the South Sudan Government and the Sudan People’s Liberation Movement/Army in Opposition have continued to mobilize forces and amass weapons in an effort to consolidate their respective power bases, she said.

“The numbers of civilians displaced across and from South Sudan has continued to rise, with no likelihood that people will return to their homes soon,” she said. “Since the conflict began in December 2013, some 1.5 million people have been internally displaced inside the country and a reported 400,000 people have sought refuge in neighbouring Kenya, Uganda, Ethiopia and the Sudan.”

Yesterday, the UN Food and Agriculture Organization (FAO) said the combined efforts of the agency, the World Food Programme (WFP) and Mercy Corps have helped to pull 2 million people back from the brink of famine and severe food insecurity in South Sudan.

“This progress, however, is fragile, partial, temporary and expensive. Despite current short-term improvements, 1.5 million people are projected to remain severely food insecure until the end of 2014, which is a 50 per cent increase from December 2013,” FAO said in a news release.

Last month, the UN declared that the South Sudan aid operation is the biggest of any single country, “but that it still falls far short in the face of overwhelming needs,” Ms. Pansieri said.

And the reports of killings and wounding of civilians by all parties to the armed conflict and other armed groups have continued unabated, she said.

The UN Mission in South Sudan (UNMISS) has opened its gates to civilians who fled the violence. Around 100,000 internally displaced persons are now seeking shelter in Protection of Civilians sites within UNMISS compounds – an entirely unprecedented influx in the history of the UN, which presents the Mission with unique challenges.

The Deputy High Commissioner recommended that more needs to be done to protect civilians and to ensure accountability for crimes and human rights violations.

“Up to now, neither the Government nor the [opposition] SPLM/A-IO has demonstrated any real interest in ensuring accountability for widespread violations and abuses committed in the course of the conflict,” she said.

She urged the international community to put pressure on the country’s leaders to prevent further violations by forces under their command and to make it clear that anyone committing crimes and human rights violations will be arrested and prosecuted. 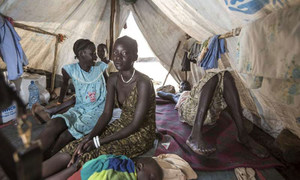 The United Nations refugee agency (UNHCR) appealed on Friday for $658 million to respond to South Sudan’s growing regional refugee crisis, with as many as 715,000 refugees expected by the end of the year.