The United Nations World Food Programme (WFP) announced today that it has resumed delivering food assistance to an area of Iraq encompassing much of the western part of the country for the first time since May, targeting 76,000 people who are part of a “massive displacement” of families fleeing fighting.

The latest deliveries bring the total number of people assisted by WFP in Iraq since mid-June to over 838,000, the agency said in a press release.

Aid agencies say the humanitarian situation in Iraq continues to deteriorate because of fighting. Throughout the country, more than 1.5 million people have been displaced in precarious conditions – many without access to food, water or other basic essentials.

“The number of people displaced by violence across Iraq is increasing at an alarming rate and access to certain areas is very difficult. WFP and its partners are working around the clock to provide urgently needed assistance to over 800,000 displaced Iraqis in 10 governorates since June,” said Mohamed Diab, WFP Regional Director for the Middle East, North Africa, Central Asia and East Europe.

They were delivered to displaced Iraqi families in the cities of Ramadi and Heet in the war-torn Al-Anbar, Iraq’s largest governorate bordering Syria, Jordan and Saudi Arabia.

“Based on assessments of the food crisis in the country, we are using new routes to deliver food and expect in the coming days to reach families displaced in volatile areas such as the southern region of al-Anbar,” said Jane Pearce, Country Director for the WFP Office in Iraq.

WFP’s operations in Iraq have been rapidly scaled up in recent weeks, thanks to a $148.9 million contribution in July from the Kingdom of Saudi Arabia that has helped the agency respond quickly to the humanitarian crisis.

The Food and Agriculture Organization (FAO), meanwhile, said today it is scaling-up critical assistance to highly vulnerable rural households in Iraq as a result of a $14.7 million grant from Saudi Arabia. The funds will mainly be used to respond to the needs of thousands of rural households whose livelihoods depend on cereal crops and livestock and who are struggling to survive.

Both donations are part of a $500 million grant that the Kingdom of Saudi Arabia has provided to the United Nations system to support Iraqis affected by the recent crisis.

Fadel El Zubi, FAO Representative in Iraq, said: “Massive displacement of people and inaccessible farmland, as well as disruptions to fuel supplies, harvest subsidies and food supply chains, are affecting the availability of and access to food. The situation is likely to deteriorate as the crisis continues and the emergency situation becomes increasingly complex.”

The UN Office for Project Services (UNOPS) began distribution of solar-powered lamps and mobile phone charging kits in collaboration with the UN refugee agency (UNHCR) in the Kurdistan Region of Iraq.

Since the beginning of 2014, more than 850,000 people have sought refuge in the Kurdistan Region of Iraq, with most going to the Dohuk Governorate. 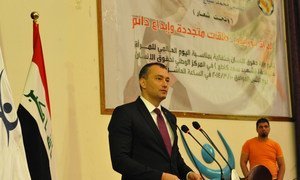 A senior United Nations official has called on the Iraqi authorities to conduct a public and independent investigation into the attack at Camp Speicher military base, when it was seized by the Islamic State of Iraq and the Levant (ISIL) and associated armed groups in June.