A senior United Nations official has called on the Iraqi authorities to conduct a public and independent investigation into the attack at Camp Speicher military base, when it was seized by the Islamic State of Iraq and the Levant (ISIL) and associated armed groups in June.

Circumstances following the seizure of the camp located near Tikrit on 12 June still remain unclear, according to the UN Assistance Mission for Iraq (UNAMI). ISIL had claimed that it had executed some 1,700 captured soldiers and other military personnel from the camp.

“Evidence suggests that a massacre has been committed at Camp Speicher and hundreds of Iraqis lost their lives at the hands of ISIL,” Nickolay Mladenov, the Secretary-General’s Special Representative and head of UNAMI, said in a news release.

“It is in the interest of their families and relatives, who remain unaware of the fate of their loved ones, as well as in the public interest, that the Iraqi authorities do all they can to uncover the truth of what has happened to these men, to locate and identify the remains of any who may have been killed, and to undertake all efforts to secure the release of any who may remain in captivity.”

UNAMI noted that photos and videos posted online by ISIL in the days immediately after the capture of the camp depicted “horrendous” scenes of a large number of young men being herded onto trucks, transported to a remote location, and then forced to lay on the ground in rows, as ISIL fighters systematically and brutally killed them.

Mr. Mladenov stressed that any person or group of persons responsible for these acts must be held accountable, adding that the events that took place at Camp Speicher remain of deep concern to the international community.

The UN Human Rights Council passed a resolution on 1 September calling on the Office of the UN High Commissioner for Human Rights (OHCHR) to dispatch a team of investigators to Iraq to inquire into crimes committed by ISIL and associated armed groups as a means of assisting the Iraqi Government and the international community to ensure accountability in relation to those crimes.

Speaking during his official visit to New Zealand, Secretary-General Ban Ki-moon said today that he has appealed to religious leaders in Iraq to stand up for tolerance, mutual respect and non-violence.

“We are all outraged at reports from Iraq about the brutal killing of civilians by ISIL, including yesterday’s reported brutal beheading of another journalist,” he stated. “I strongly condemn all such despicable crimes. And I refuse to accept that whole communities can be threatened by atrocity crimes because of who they are or what they believe.” 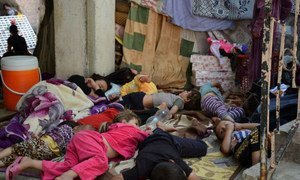