United Nations Secretary-General Ban Ki-moon has welcomed the signing by the South Sudanese Government and the opposition of a plan to implement a seventh-month-old ceasefire deal between the two sides.

“The Secretary-General welcomes the holding today of the Inter-Governmental Authority on Development (IGAD) Heads of State Summit on South Sudan,” said a statement attributed to the spokesperson for Mr. Ban.

While praising the tireless efforts from IGAD Heads of States and their Special Envoys for a peaceful resolution to the South Sudan crisis, Mr. Ban also reiterated in the statement the full support of the United Nations to this peace process.

Moreover, Mr. Ban urged both parties to immediately implement the agreement and uphold their commitment to establishing a Transitional Government of National Unity.

The signing of the 23 January 2014 Cessation of Hostilities Agreement implementation matrix by the Government of South Sudan and the Sudan People’s Liberation Army in Opposition (SPLM/AiO) took place on 25 August, during IGAD Summit in Addis Ababa, which chaired by Ethiopian Prime Minister Hailemarriam Dessaleg.

According to the final communiqué from IGAD, the summit endorsed the Protocol on agreed principles on transitional arrangements towards resolution of the crisis in South Sudan, which will lead to a new negotiated political dispensation in South Sudan and calls on the SPLM/A-10 to sign the Protocol.

Political in-fighting between President Salva Kiir and his former deputy, Riek Machar, started in mid-December 2013 and has since turned into a full-fledged conflict that also sent nearly 100,000 civilians fleeing to UNMISS bases around the country. Overall, the crisis has uprooted some 1.5 million people and placed more than 7 million at risk of hunger and disease. South Sudan has also experienced several bouts of violence in recent weeks. 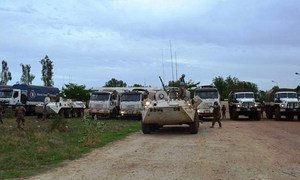 The United Nations Mission in South Sudan (UNMISS) has condemned the detention of a team of six ceasefire monitors and three aircrew in Bouth, Unity state, on Saturday by forces allied to Sudan People’s Liberation Army (SPLA) in opposition.