The United Nations Mission in South Sudan (UNMISS) has condemned the detention of a team of six ceasefire monitors and three aircrew in Bouth, Unity state, on Saturday by forces allied to Sudan People’s Liberation Army (SPLA) in opposition.

The Intergovernmental Authority on Development (IGAD) monitors are a part of a verification team and were in Unity state on a routine mission when they were detained. On Sunday, UNMISS assisted in locating and flying the ceasefire monitors and the aircrew to the mission’s base in Bentiu.

A Sudan People’s Liberation Army liaison officer, who was part of the team, died during the detention period reportedly due to natural causes, the Mission said. Efforts are currently underway to recover the IGAD-contracted aircraft that flew the monitors to Bouth, said UNMISS in a press release.

Reiterating its full support for the IGAD mediation and the monitoring and verification mechanism, as agreed to by both parties on 23 January 2014, UNMISS called for the full cooperation of all parties in finding a peaceful and durable solution to the current crisis.

South Sudan has experienced several bouts of violence in recent weeks. Just last week, the UN base in Bentiu came under fire. One child was wounded. The incident could potentially have harmed more civilians staying at the displaced persons camp as well as UN personnel. A prior attack caused hundreds of people to seek shelter at the nearest airport. Approximately 340 civilians took shelter with UNMISS troops, and then were escorted to safety.

The latest clashes come as the two rivals fell short of reaching a power-sharing deal by 10 August, through talks in Ethiopia facilitated by IGAD. 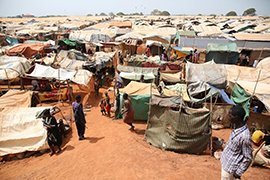 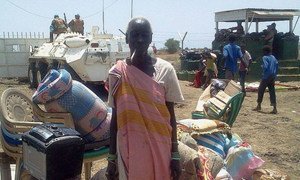 The United Nations Mission in South Sudan (UNMISS) today condemned the live gunfire by Sudan People’s Liberation Army (SPLA) soldiers near the UN base in Bentiu, that wounded a child.