The United Nations human rights chief today expressed profound regret that Japan has not provided effective redress to victims of wartime sexual slavery leading back to the end of the Second World War.

The outgoing High Commissioner for Human Rights, Navi Pillay, said in a statement that Japan “has failed to pursue a comprehensive, impartial and lasting resolution” to address the rights of so-called “comfort women.”

“It pains me to see that these courageous women, who have been fighting for their rights, are passing away one by one, without their rights restored and without receiving the reparation to which they are entitled,” Ms. Pillay stressed.

She also criticized a Government report from this June which stated that “it was not possible to confirm that women were forcefully recruited.” Following the release of this report, she noted that a group in Tokyo publicly declared that “comfort women were not sex slaves but wartime prostitutes.”

Ms. Pillay, whose six-year term concludes at the end of the month, said that the Government of Japan has received over the years recommendations from a number of UN independent experts, human rights treaty bodies and from the Human Rights Council under its Universal Periodic Review for it to take concrete measures to tackle the issue.

Most recently, the UN Human Rights Committee, which oversees implementation of the International Covenant on Civil and Political Rights, called on Japan to take “immediate and effective legislative and administrative measures” to ensure that all allegations of sexual slavery are investigated and perpetrators prosecuted.

The Committee also called for access to justice and reparations for victims and their families, the disclosure of all evidence available, and education in the country surrounding the issue.

Praising Japan’s engagement on prevention of violence in conflict, the UN human rights official encouraged the Government “to pursue a comprehensive, impartial and lasting resolution of the wartime sexual slavery issue with the same vigor.”

She underscored that the issue of “comfort women” is not relegated to history, but continues to impede violations of victims’ human rights.

“It is a current issue, as human rights violations against these women continue to occur as long as their rights to justice and reparation are not realized,” Ms. Pillay stressed. 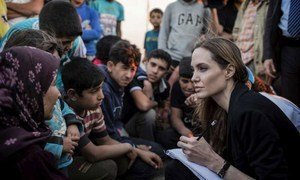