Emma Beals/IRIN
The Baharka camp, 5km north of Erbil in northern Iraq, is home to thousands of internally displaced people (IDPs) following the takeover of large swathes of the country by the Islamic State of Iraq and the Levant (ISIL).
3 August 2014

The capture of the northern Iraqi town of Sinjar by Islamic State of Iraq and the Levant (ISIL) militants and other armed groups has displaced as many as 200,000 people and triggered a "humanitarian tragedy", senior United Nations officials warned today.

In a press release, the UN Assistance Mission in Iraq (UNAMI) confirmed reports that ISIL and associated armed groups seized control of nearly all of Sinjar and Tal Afar districts in Ninewa Province, including the oil fields of Ain Zala and Batma, bordering the Kurdistan Region of Iraq.

“A humanitarian tragedy is unfolding in Sinjar,” declared UNAMI chief and Special Representative of the Secretary-General for Iraq, Nickolay Mladenov, who added that the Government of Iraq and the Kurdistan Regional Government should urgently restore their security cooperation in dealing with the crisis.

According to reports, as many as 200,000 civilians, most of them from the Yezidi community, have fled to Jabal Sinjar.

UN Secretary-General Ban Ki-moon, in a statement issued by his spokesperson later in the day also expressed alarm at reports of the takeover by ISIL and associated armed groups of the two districts in Ninewa Province, saying the UN chief is “appalled” by the mass civilian displacement triggered by those actions. He expressed his deepest concern for the safety and security of those civilians.

Mr. Ban in his statement echoed the call made by his Special Representative upon the Government of Iraq and the Kurdistan Regional Government “to put their differences aside and work closely together in addressing the urgent security needs of the nation, and adequately protecting and safeguarding the people and territorial integrity of Iraq.”

The Secretary-General also called on all Iraqis to assist the displaced, and reminded all parties to the conflict of their obligation in accordance with international law to ensure humanitarian access and to facilitate the delivery of assistance to those fleeing the violence.

“All parties must abide by international law and protect civilians living in areas affected by the fighting,” said the UN chief.

For its part, UNAMI said that the United Nations stands ready to support the efforts of the Government of Iraq and the Kurdistan Regional Government in addressing the urgent humanitarian needs of those displaced by the current conflict.

UNAMI warned that the humanitarian situation of these civilians is reported as dire, and they are in urgent need of basic items including food, water and medicine. An unknown number of civilians are also reported to have moved towards Dahuk and Zako in the Kurdistan region.

The United Nations has grave concerns for the physical safety of these civilians – particularly those now trapped in Jabal Sinjar area, as it is now surrounded by ISIL militants, said the Mission.

As such, Mr. Mladenov called on all Iraqi authorities, civil society and international partners to work with the UN to ensure the delivery of life saving humanitarian assistance.

Upon his request, this morning, Deputy Special Representative of the Secretary-General, Gyorgy Busztin, met Iraqi President Fuad Ma'soum who shared grave concern over the situation of minorities impacted by the ISIL takeover of significant areas in the Ninewah plain.

He called it the collective responsibility of all Iraqis to assist the displaced. The President expressed particular concern over the fate of the minority Yezidi community. 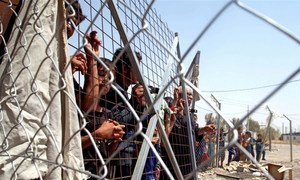