UNRWA
Palestinian families seek shelter at an UNRWA school after evacuating their homes north of the Gaza Strip.
3 August 2014

Amidst an 'appalling' escalation of violence in the Gaza Strip since the collapse of a brief 1 August ceasefire, Secretary-General Ban Ki-moon strongly condemned the killing today of at least 10 Palestinian civilians in shelling outside of a United Nations school in Rafah which had been sheltering thousands of civilians.

“The attack is yet another gross violation of international humanitarian law, which clearly requires protection by both parties of Palestinian civilians, UN staff and UN premises, among other civilian facilities,” declared Mr. Ban in a statement issued by his spokesperson in New York.

“United Nations shelters must be safe zones not combat zones,” the Secretary-General's statement continued, adding that the Israel Defence Forces (IDF) have been repeatedly informed of the location of these sites. “This attack, along with other breaches of international law, must be swiftly investigated and those responsible held accountable. It is a moral outrage and a criminal act.”

The UN chief's strongly worded statement comes after the collapse two days ago of a humanitarian ceasefire brokered by the United Nations and the Unites States, and in the wake of two earlier reported attacks near schools managed by the UN Relief and Works Agency for Palestine Refugees in the Near East (UNRWA).

As the brief pause faltered and attacks in Gaza escalated, UN humanitarian officials yesterday said that weeks of intense fighting has left medical services and facilities in the enclave “on the verge of collapse,” warning that a health disaster of widespread proportions is rapidly unfolding.

Mr. Ban's statement today expressed “profound dismay” over the appalling escalation of violence and loss of hundreds of Palestinian civilian lives since the breach of the ceasefire. The resurgence in fighting has only exacerbated the man-made humanitarian and health crisis wreaking havoc in Gaza.

“Restoring calm can be achieved through resumption of the ceasefire and negotiations by the parties in Cairo to address the underlying issues,” said the statement, adding: “The Secretary-General repeats his demand to the parties to immediately end the fighting and return to the path of peace. This madness must stop.”

Mr. Ban's strong condemnation was echoed in a statement issued in Jerusalem by the UN Special Coordinator for the Middle East Peace Process, Robert Serry, who also expressed dismay at reports of a strike in the immediate vicinity of the UNRWA school, which was sheltering some 3,000 civilians displaced by the ongoing violence.

“It is simply intolerable that another school has come under fire while designated to provide shelter for civilians fleeing the hostilities,” said the statement, which underscored the Secretary-General's call on all parties to respect the inviolability of UN premises and protect civilians.

Mr. Serry in his statement deplored the escalation of violence over the past 48 hours, particularly in the Rafah area. “This shocking violence underscores the urgent need, despite recent setbacks, for a ceasefire and negotiations between all parties in Cairo addressing the underlying issues.”

In the statement, Mr. Serry called on all parties to cooperate with ongoing international efforts to find a way out of this crisis and prevent the loss of more human lives.

Meanwhile, UNRWA announced today that since 20 July, nine of its staff members have been killed, humanitarian workers struck down by the “pitiless conflict.”

“These were people who had dedicated years or decades to serving the Palestine refugees of Gaza”, said UNRWA Commissioner-General Pierre Krahenbuhl.

“Many of them were educators, inculcating in children the hope of a brighter future and supporting them through the most difficult of times…The cruel ways in which they lost their lives has devastated families they leave behind and all of us in UNRWA,” he said. 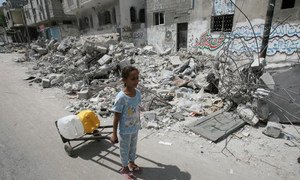 Ban ‘shocked’ at collapse of Gaza ceasefire, urges maximum restraint by all parties

Strongly condemning the reported violation by Hamas of the mutually agreed humanitarian ceasefire which commenced this morning in the Gaza Strip, United Nations Secretary-General Ban Ki-moon also expressed deep concern about renewed Israeli attacks on the tiny enclave, which have reportedly killed more than 70 Palestinians.