While countries in West Africa are trying to promote development and consolidate democracy, they continue to face daunting challenges such as transnational organized crime and growing terrorist activities, the top United Nations official in the region told the Security Council today, while also warning of the increasing threat the Boko Haram crisis poses to Nigeria.

Said Djinnit, the Secretary-General’s Special Representative for West Africa, added that the UN Office for West Africa (UNOWA), which he heads, has been trying to sensitize regional leaders to the need for “decisive concerted efforts” to fight these threats to regional security and stability.

Of great concern, he said as he presented the Secretary-General’s latest report on developments in the region, is the potential for recruitment of unemployed youth by organised criminal networks in the region.

“It is essential that West African countries close ranks and establish effective strategic and operational cooperation mechanisms to address this threat which runs the risk of destabilising the whole Sahara-Sahel region from the Atlantic to the Indian oceans,” he stated. “Their efforts should be strongly backed by the rest of the international community and the United Nations.”

Next year will be a crucial one on the democratic front, Mr. Djinnit noted, pointing out that no less than five crucial elections will be organized in 2015, including in Côte d'Ivoire, Burkina Faso, Guinea, Niger and Nigeria.

These polls, he added, will be held often in “highly polarised societies and within a context of deep political divides and controversies related to ongoing or potential initiatives to amend constitutional provisions related to presidential term limits.”

UNOWA will continue to work closely with the Economic Community of West African States (ECOWAS) and other stakeholders to assist in efforts to prevent political differences from developing into violent crises and in providing electoral assistance towards consolidating democracy in the region, the envoy said.

“Indeed, in view of the prevailing fragility in the region, every effort should be made to ensure that democracy and stability are pursued with equal commitment, as they are mutually reinforcing.”

In addition to these challenges, the West African region is also currently struggling to respond to a deadly pandemic caused by the Ebola virus. The outbreak identified in February in the south-eastern region of Guinea has rapidly spread to Liberia and Sierra Leone.

“While significant progress in efforts to contain the outbreak of the disease has been recorded, a relapse has been noted in the last few weeks, with the risk of further spread within the region,” Mr. Djinnit reported.

According to the UN World Health Organization (WHO), there have been at least 759 infections and 467 deaths related to the disease since February.

“It is important that the international community pays due attention and support to this epidemic which is adding to many other challenges to stability in the region,” the envoy stressed.

In the context of the growing insecurity in the Sahel, Mr. Djinnit said the situation in Nigeria remains of “great concern.” Despite efforts by the Nigerian Government, the school girls abducted by the insurgent group Boko Haram from Chibok in April remain in captivity.

While efforts to obtain their safe release are ongoing, he said the level of violence against civilians in Nigeria continues to escalate, resulting in significant displacement in the north of the country.

“It is disheartening to note that within the last two weeks at least 18 attacks attributed to Boko Haram have been conducted, resulting in the tragic deaths of innocent civilians and displacement of peoples. The Boko Haram crisis is now affecting security in the sub-region,” he stated.

“With the growing insecurity in the northeast of the country, coupled with increasing political tensions and divisions in the lead up to the 2015 general elections, Nigeria is at a crossroads,” said Mr. Djinnit. “It is therefore critical, in my view, that the Council members continue to lend their support to efforts and initiatives aimed at preserving stability in the country.

“All efforts should be made to address the insurgency and insecurity in Nigeria, which has over the past few decades played a prominent role in the maintenance of regional and global peace and security. The present situation also underscores the paramount need for the Nigerian political class to forge a unified stand in confronting the persisting insecurity.” 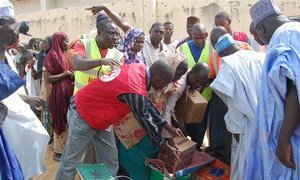 While efforts are underway to safely release the abducted Nigerian school girls, more civilians are killed and many others are being displaced by Boko Haram insurgents, the United Nations envoy for West Africa today warned, reiterating the Organization’s commitment to helping stabilize the country.