Political dialogue is the only answer to the conflict in South Sudan, Secretary-General Ban Ki-moon stressed today, as he urged maximum restraint by all parties amid accusations of breaches of the ceasefire agreement signed just a few days ago.

On Friday, President Salva Kiir and former vice president Riek Machar signed an agreement to resolve the five-month-old crisis in South Sudan, which has claimed thousands of lives, left nearly five million in need of humanitarian assistance and led to atrocities being committed by both sides.

“Now the onus is on both South Sudanese leaders to accelerate the momentum for peace,” Mr. Ban said as he briefed the Security Council following his visit to the world’s youngest nation last week to sound the alarm about the violence and the risk of catastrophic famine.

“If the conflict continues, half of South Sudan’s 12 million people will either be displaced internally, refugees abroad, starving or dead by the year’s end,” he warned.

The conflict has also displaced more than a million people, including more than 80,000 people who are sheltering at UN bases around the country.

While in the capital, Juba, Mr. Ban visited the Tomping protection of civilians site, which hosts some 20,000 people. “I was moved by their welcome and appalled at the conditions they are having to endure, which are worse than in any of the many refugee camps I have visited around the world,” he said.

“The United Nations policy of opening our gates as an emergency option to protect innocent civilians is correct, unprecedented and not without considerable risk – to United Nations staff, to our relations with communities and to those we are trying to shelter,” the Secretary-General stated.

“It is not a routine decision, nor one we took lightly, but one we were morally compelled to take. I am proud of the actions of our United Nations peacekeepers and civilian staff. Their quick response and courage has saved tens of thousands of lives.

“But this is not a long-term solution,” he stressed. “This is an entirely man-made calamity and it needs the engagement of all actors to change course.”

Mr. Ban highlighted five priorities, beginning with the need to end the fighting immediately. “I am troubled by the accusations by both sides of breaches of the ceasefire already, and I urge maximum restraint by all parties.”

He also stressed the need for both sides to fulfil their commitment to allowing humanitarian access – by air, by road and, in particular, by barge along the Nile – and for the international community to support humanitarian action.

“The United Nations is launching a massive operation to help 3.2 million people, but we need resources. The humanitarian community is $781 million short of the $1.27 billion that we estimate is needed by the middle of this year,” Mr. Ban said, as he urged all countries to support the donor conference on South Sudan to be hosted by Norway and the UN on 20 May.

Equally important is the need for justice and accountability, and for the two leaders to recommit to inclusive nation-building that involves all political leaders and civil society.

“They must cease a senseless power struggle and restore the sense of national unity that prevailed at the time of independence,” said the Secretary-General.

Meanwhile, the UN Mission in South Sudan (UNMISS) reported incidents of fighting between Sudan People’s Liberation Army (SPLA) and opposition forces in parts of Unity and Upper Nile state over the weekend, in violation of the ceasefire agreement.

Both sides clashed west of Bentiu in Unity state yesterday, the Mission reported. Small arms fire, as well as several explosions, was also heard close to the Mission’s compound in Bentiu, where upwards of 23,000 civilians are being protected.

“The UN Mission condemns the fighting and asks the parties to immediately implement the commitments that they have signed into action on the ground, and cease all hostilities,” UN spokesperson Stéphane Dujarric told reporters in New York. 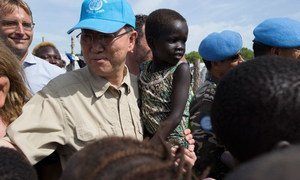 Secretary-General Ban Ki-moon has welcomed the signing of an agreement to resolve the crisis in South Sudan, and demanded an immediate cessation of hostilities.