UNHCR/A. McConnell
Members of a Syrian refugee family huddle around a stove inside their shelter in Lebanon’s Bekaa Valley.
21 April 2014

Addressing reporters in New York, Mr. Ban’s spokesperson, Stephane Dujarric, said holding elections in the current circumstances “will damage the political process and hamper the prospects for political solution that the country so urgently needs.”

“Such elections are incompatible with the letter and spirit of the Geneva Communiqué,” he added in reference to the action plan adopted 2012 during the first international conference on the conflict, calling for a transitional government to lead to free and fair elections.

Earlier this year, Mr. Brahimi mediated two rounds of talks between the Syrian Government and the main opposition group aimed at finding a political solution to the crisis based on the goals of the Communiqué, but the both sides stuck to their positions and the discussions yielded only modest cooperation on a humanitarian issue related to aid access in the long-besieged Old City of Homs.

President Bashar al-Assad’s Government announced that it would hold the poll on 3 June despite three years of fighting between his office and various opposition groups. According to media reports, the Constitutional Court will start accepting nominations for president as early as tomorrow.

Mr. Dujarric said that despite the UN’s criticism, Mr. Ban and Mr. Brahimi will “continue to search and build upon any opening for a solution to the tragedy in Syria”. 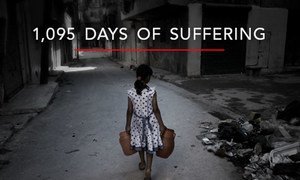 Secretary-General Ban Ki-moon today said that the international community cannot afford to lose focus or turn away from war-torn Syria, and called for renewed political efforts to end what is now, after three years of bloodshed, the biggest humanitarian and security crisis in the world.