UNICEF/Romenzi
Syrian Arab Republic: A girl, carrying jerrycans of water, walks past a pile of debris, on a street in Aleppo, capital of the north-western Aleppo Governorate.

12 March 2014
Secretary-General Ban Ki-moon today said that the international community cannot afford to lose focus or turn away from war-torn Syria, and called for renewed political efforts to end what is now, after three years of bloodshed, the biggest humanitarian and security crisis in the world.

“The Secretary-General deeply regrets the inability of the international community, the region and the Syrians themselves to put a stop to this appalling conflict,” Mr. Ban’s spokesperson said in a statement marking three years since fighting began between Syrian President Bashar al-Assad and various opposition groups seeking his ouster.

Recalling that peaceful protests in 2011 demanding universal rights and freedoms for the Syrian people were met with “brutal force, escalating bloodshed and the devastation of civil war,” the UN chief appealed to all, as the conflict enters its fourth year, “to reflect upon the long and growing list of horrors taking place in Syria every day.”

“Only a political solution will end the nightmare of the Syrian people,” Mr. Ban said appealing in particular to the Russian Federation and the United States, as the initiating States of the Geneva Conference on Syria, “to take clear steps to reenergize the Geneva process”.

The basis of those talks is full implementation of an action plan adopted in the so-called Geneva Communiqué of 2012, the first international conference on the conflict, which calls for a transitional government to lead to free and fair elections.

Two rounds of talks mediated by Joint Special Representative Lakhdar Brahimi, the first in January of this year followed by a second round in February, saw both sides sticking to their positions and yielded only modest cooperation on a humanitarian issue related to aid access in the long-besieged Old City of Homs.

In today’s statement, Mr. Ban strongly urged the Syrian Government and opposition “to exercise responsibility, leadership, vision and flexibility to rise to the challenge”.

“The Syrian people need a clean break from the past to move towards a new Syria where their legitimate aspirations are met and all communities are protected," The Secretary-General said, urging the Syrian sides, as well as the regional and international actors, to work with Mr. Brahimi “to bring the tragedy in Syria to an end”.

“The effects and threats of this conflict will only grow and spread,” he warned, unless a political solution is reached.

Over the past year, this conflict saw “the worst use of weapons of mass destruction in the 21st century”, Mr. Ban said, with the use of chemical weapons whose destruction has been ordered by 30 June by the UN Security Council and the Organisation for the Prohibition of Chemical Weapons (OPCW).

This removal and destruction of this programme is now more than one-third of the way completed, according to recent comments from Sigrid Kaag, the Special Coordinator of the Joint OPCW-UN Mission.

In addition to the deadly violence, Mr. Ban has also noted that world’s cultural heritage is under “grave threat”.

The Director-General of the UN Educational, Scientific and Cultural Organization (UNESCO), Irina Bokova, and other senior officials, have repeatedly called for the preservation of the country’s cultural heritage sites.

Syria already has six sites inscribed to the World Heritage List: the ancient cities of Aleppo, Bosra and Damascus, ancient villages of northern Syria, Crac des Chevaliers and Qal’at Salah El-Din, and the site of Palmyra.

Twelve additional sites were being considered for admission to the agency’s List before the fighting broke out.

Ms. Bokova is expected to issue a statement on this aspect of the crisis later today. 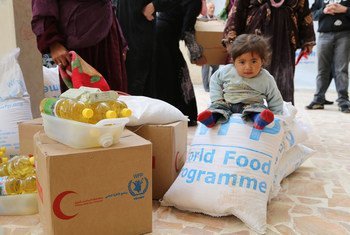 10 March 2014
As the conflict in Syria enters its fourth year, the United Nations Children’s Fund (UNICEF) has released a new report that carries alarming news: more than twice as many children are affected by the hostilities than were 12 months ago, and particularly hard hit are up to a million children trapped in areas that are under siege or that are hard to reach with humanitarian assistance due to continued violence.