Opposition forces in South Sudan killed “hundreds of South Sudanese and foreign civilians” after determining their ethnicity or nationality when they captured Bentiu last week, the United Nations confirmed today, calling for an immediate stop to the targeting of “innocent, unarmed” civilians.

The United Nations Mission in South Sudan (UNMISS) strongly condemned the killings, which reportedly included attacks on a hospital, mosque and church, and a UN World Food Programme (WFP) compound.

“These atrocities must be fully investigated and the perpetrators and their commanders shall be held accountable,” said the Officer in Charge of UNMISS, Raisedon Zenenga, who also urged the opposition Sudan People’s Liberation Army (SPLA) forces and the Government troops to respect the Cessation of Hostilities Agreement they signed in January.

Over the past two months, thousands of people are believed to have been killed by fighting that began in mid-December as a political dispute between President Salva Kiir and his former deputy president, Riek Machar.

The Mission also decried the use of hate speech over the radio “declaring that certain ethnic groups should not stay in Bentiu and even calling on men from one community to commit vengeful sexual violence against women from another community”.

The attacks took place between 15 and 16 April, in the same timeframe that UNMISS extracted hundreds of civilians, some injured, who had taken refuge in places throughout Bentiu and Rubkona. The Mission is currently protecting more than 12,000 civilians on its base, and some 60,000 others around the country.

At the Bentiu Hospital, several Nuer men, women and children were killed on 15 April for hiding and refusing to join other Nuers who had gone out to cheer the SPLA as they entered the town.

“Individuals from other South Sudanese communities, as well as Darfuris, were specifically targeted and killed at the hospital,” UNMISS confirmed in today’s statement.

According to the Mission, the SPLA also entered the Kali-Ballee Mosque where civilians had taken shelter, separated people into nationalities and ethnic groups, and killed some of them.

“More than 200 civilians were reportedly killed and over 400 wounded at the Mosque,” UNMISS said.

At a Catholic church and at the vacated WFP compound, SPLA soldiers similarly asked civilians who had taken refuge there to identify their ethnic origins and nationalities and proceeded to target and kill several individuals.

In an interview with UN Radio, Joseph Contreras, Acting Spokesperson of UMISS, said that along with condemning the bloodletting in Bentiu, the Mission deplored the hate speech and incitement to violence as “especially regrettable and unfortunate, given what happened in Rwanda 20 years ago, when radio stations were used to broadcast the hate messages” that fanned the flames of tension, ultimately sparking mass ethnic killings in that country.

While it was difficult to establish a direct like between the hate messages and the violence that erupted on 15 April, “at a minimum, the airing of such messages only further poisons the political and social climate of that part of South Sudan and polarizes even further between the leading ethnic groups in the region.”

“We’ve been monitoring the broadcast of hate messages on a regular basis since the crisis first broke out…and we have called on relevant national state and local authorities to take all measures possible to prevent the airing of such messages,” continued Mr. Contreras, adding on a more optimistic note that some of the opposition commanders among those that had captured Bentiu last week had broadcast messages of a very different nature, calling for unity and an end to tribalism in South Sudan.

Unfortunately, those appeals for reason had had to compete with messages of “sheer ethnically- based hatred.”

In all this, he said, UMISS hopes that when negotiating delegations reconvene on 23 April in the Ethiopian capital, Addis Ababa, that the new round of peace talks can lead to a more comprehensive political settlement of the differences separating the parties.

“Clearly, the Cessation of Hostilities agreement signed over three months ago has been violated repeatedly by forces loyal to both sides and it a source of concern and considerable dismay to UNMISS that those violations continue” in spite of repeated calls from the United Nations and the wider international community for both sides to honour scrupulously the accord two which they had both agreed. 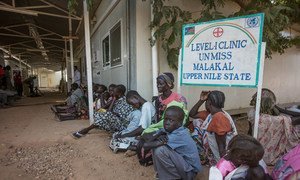 The United Nations peacekeeping mission in South Sudan (UNMISS) has reported that heavy fighting broke out earlier today between pro-Government and opposition forces near its compound in the Upper Nile state town of Malakal, while condemning those who instigated the inter-communal violence that flared up inside its base.