5 April 2014
Secretary-General Ban Ki-moon paid a visit to the Central African Republic (CAR) on Saturday to focus the world's attention on a crisis that has been marked by widespread atrocities and suffering, and to call on the country's citizens to heed the lessons of neighbouring Rwanda and stop the violence.

“There is a hole in the heart of Africa. Every day, I wake up thinking about your trials and troubles. Everywhere, I have called on leaders to step up their efforts,” Mr. Ban said in an address to the country's National Transitional Council.

“Some say this is a forgotten crisis. I am here to help make sure the world does not forget.”

The UN chief's visit comes amid a recent escalation in fighting in the CAR capital, Bangui, between Christians and Muslims. The crisis, which began in December 2012, has left thousands of people dead, and 2.2 million, about half the population of CAR, in need of humanitarian aid. More than 650,000 people are still internally displaced, and over 290,000 have fled to neighbouring countries in search of refuge.

The visit, which had not been announced prior to his arrival and lasted just a few hours, also comes ahead of Mr. Ban's travel to Rwanda for the 20th commemoration of the genocide that occurred there.

“The international community failed the people of Rwanda 20 years ago. And we are at risk of not doing enough for the people of the CAR today,” said the Secretary-General, who met with the Head of State of the Transition, President Catherine Samba-Panza, as well as with representatives of displaced families in Bangui.

He stressed that it is vital to ensure that there no such anniversaries in CAR, stating: “Do not repeat the mistakes of the past – heed the lessons. The fate of your country is in your hands. The people of CAR should not be killing the people of the CAR.”

Mr. Ban noted that atrocity crimes are being committed in CAR. “Ethno-religious cleansing is a reality. Most members of the Muslim minority have fled. Muslims and Christians have been placed in mortal danger simply because of who they are or what they believe.

“The security of the state has been replaced by a state of anarchy, he added. “People have been lynched and decapitated. Sexual violence is on the rise. Gruesome acts have been committed while others cheered on the perpetrators. There has been total impunity – zero accountability. This must change.”

Mr. Ban commended the African Union and French forces, known as MISCA and Sangaris, for their efforts on the ground, but noted that they are “under-resourced and overwhelmed” by the sheer scale of the need.

To address this situation, he has called for the immediate deployment of more troops and police, as well as proposed the transformation of MISCA into a UN peacekeeping operation. While recognizing the European Union for its decision to deploy forces in the coming days, the Secretary-General called on the international community to do more, and act more quickly.

“You need security. You need the rule of law. You need a better future. The world agreed on our collective responsibility to protect a population when the State is unwilling or unable to do that basic job,” he stated.

“The people of CAR should not have to run and die while the world decides whether to keep its promise. You have waited long enough,” said Mr. Ban, who added at a news conference before departing the country that he was very moved by his visit and that the stories of those he met today will stay with him forever. 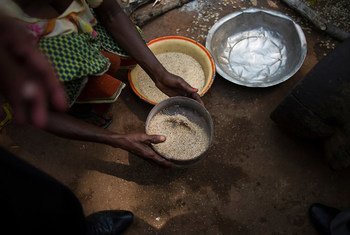