OCHA/Phil Moore
A woman sifts through seeds at a camp for people displaced by violence in the Central African Republic.

A statement issued by Mr. Ban’s spokesperson said that the further deterioration of the security situation in the country has resulted in additional fatalities, a high number of injured, and increased hardship for the population.

“The Secretary-General condemns in the strongest possible terms all acts of violence against civilians, and against international forces working in the Central African Republic to re-establish peace and order. He stresses the fundamental importance of protecting civilians at all times,” said the statement.

Following her recent visit to the country, UN High Commissioner for Human Rights Navi Pillay said the inter-communal hatred between Christians and Muslims have reached “a terrifying level,” and called on the international community to scale up aid efforts for those affected.

In today’s statement, the Secretary-General reminded all those who are involved in spreading the violence, including those directly or indirectly supporting or otherwise facilitating the actions of armed groups, that they will be held accountable for their actions and brought to justice.

In this regard, he stressed the importance of quickly establishing a list of individuals who act to undermine peace, stability and security in CAR, as called for by the Security Council in a resolution adopted late last year.

That resolution also authorized an African-led and French-backed peacekeeping force to quell the spiralling violence in CAR, and requested the establishment of an international commission of inquiry to investigate reports of human rights abuses by all parties since 1 January 2013.

“The Secretary-General reaffirms the full commitment of the United Nations to help the Central African Republic emerge from the ongoing crisis and to build peace,” the statement added. 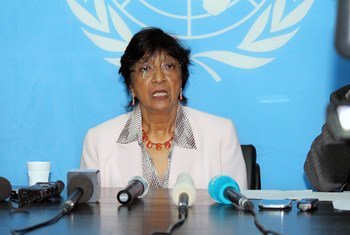