The United Nations refugee agency today expressed its deep concern about the situation in South Sudan’s Upper Nile state, where needy populations, including refugees, internally displaced persons (IDPs) and, increasingly, host communities are being affected as security conditions have prevented the delivery of food and other relief items to several camps since February.

“It has been impossible to deliver food due to the security situation, which is leading to severe malnutrition [and] recent severe cases among children have us particularly worried at the risks of prolonged disruption," said Adrian Edwards, spokesperson for the UN High Commissioner for Refugees (UNHCR) at a news briefing in Geneva.

The violent clashes in the northern town of Malakal and other strategic river and road transport towns this year have made pre-positioning impossible.

Less than three years after South Sudan gained independence from Sudan, the fledgling nation has been wracked by a conflict that has left thousands dead and some 870,000 displaced since it first erupted in mid-December. Some 77,000 people have sought protection at UN bases around the country.

"Unless food is delivered immediately, the health and nutrition status of refugees will become severely compromised. We are in the dry season, the traditional hunger gap, when refugees are unable to grow food to supplement the World Food Programme (WFP) rations,” Mr. Edwards explained.

He further drew attention to the vulnerable groups that make up one third of the refugee population: children under five years of age, pregnant and lactating women, older people, those living with disability and people who are chronically ill. He emphasized that “as the rains start, normally in April, vulnerability to water-borne diseases, malaria and respiratory tract infection will increase.”

UNHCR reports that in recent weeks, there have been several cases of severe malnutrition among very young children in the refugee camps, which is symptomatic of protein deficiency that can be caused by illness. "Food shortages could, moreover, lead to conflict between refugees and host communities foraging for wild fruits and vegetables. Already, we have seen tensions over grazing lands and open water sources," Edwards said.

Meanwhile, a UN spokesman in New York reports that a team from the UN Mission in South Sudan (UNMISS) patrolling Juba yesterday observed that civilians had generally resumed their daily activities, although some shops remained closed.

He said the Mission also reported Sudan People’s Liberation Army (SPLA) presence in the capital, with access to some areas and roads still restricted. The Mission continues to protect an estimated 39,000 displaced persons at its two sites in Juba.

In addition, UNMISS is reporting a growing number of violations of the Status of Forces Agreement (SOFA), including restrictions of movement, making it difficult for the Mission to implement its mandate, and dangerous for UN staff working in South Sudan. 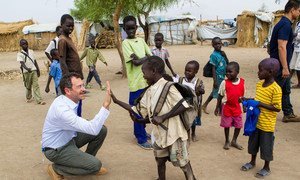 The top United Nations humanitarian official in South Sudan is sounding the alarm about the dire situation in the country, warning that the world’s youngest nation could collapse by year’s end if urgent action is not taken to help see its people through the current crisis.