14 March 2014
Wrapping a historic visit to Nigeria, the United Nations rights chief today congratulated the Government for its efforts towards tackling “very difficult human rights problems”, but stressed the need to urgently resolve the conflict in the country’s northeast, end corruption, and protect its vulnerable populations, including the LGBT community, which ‘lives in fear”.

“Since Nigeria’s transition to democracy, much has been achieved on the human rights front,’ noted Navi Pillay, UN High Commissioner for Human Rights, at a press conference during her four-day visit to assess the situation in the country.

“At the same time,” she stressed, “with a fourfold increase in the size of the population over the past 50 years, widespread poverty, an increasingly brutal conflict in the northeast, sporadic violence in the middle belt and rising crime in other parts of the country, Nigeria is currently facing its most daunting set of challenges for decades.”

During her visit – the first ever official mission to Nigeria by a UN High Commissioner for Human Rights – Ms. Pillay said she emphasized the important role Nigeria plays on the international scene, with Africa’s largest population and “huge potential”.

Noting that Nigeria is currently a member of the UN Security Council, she insisted that the country can and should “play an even more significant role on the international stage in the years to come, and its embrace of human rights will be a major element in deciding its future course, both internally and internationally”.

For this reason,” she added, “the main focus of my visit has been on filling gaps and addressing systemic malfunctions.”

“No country in the world has a perfect human rights record, and Nigeria is no exception,” Ms. Pillay observed, basing her statement on the 219 recommendations that Nigeria received in the global human rights review system, known as the Universal Periodic Review (UPR).

Of those recommendations made by other States on torture, arbitrary detention and extrajudicial executions, the Nigerian Government immediately accepted 175 of them, and is expected to give its response on most of the remainder later this month. She highlighted that for the first time, there is an Anti-Torture Bill before the National Assembly, and she had also been “heartened to learn that the problematic Police Force Order 237, which gives police too much latitude to resort to lethal force, is being reviewed.”

“I will be watching the progress of these important legislative initiatives closely,” said Ms. Pillay as she urged both the House of Representatives and the Senate to ensure their swift passage, and their absolute compliance with international laws and standards.

In her remarks, she drew attention to the “monstrous” conflict in the northeast, where Boko Haram “has targeted some people simply because of their religion or professional occupation, and indiscriminately killed and maimed many others,” burning down houses, churches and schools.

Close to half a million people have been displaced inside Nigeria and some 57,000 are now reported to have spilled across borders into neighbouring countries, such as Cameroon, Chad and Niger. Farmland has been abandoned, and the food security is rampant in many areas.

Concerning Nigeria’s decision to deploy its military in the region, Ms. Pillay stressed that “it is vital that Government forces do not exacerbate the problem by taking actions that displace, endanger or kill civilians. Many people I have met with during this visit openly acknowledge human rights violations have been committed by the security forces, and these have served to alienate local communities, and created fertile ground for Boko Haram to cultivate new recruits.”

The High Commissioner highlighted the importance of regional cooperation, and transparent investigations into alleged violations by security forces, requesting that “the veil of uncertainty” be lifted and that “credible and reliable information about what is going on in the North East become more readily available.”

On the subject of poverty and corruption, Ms. Pillay welcomed President Goodluck Jonathan’s New Year statement pledging to tackle that scourge, which, from a human rights perspective, is extremely damaging to rule of law, exacerbates economic inequalities and perverts the systems that are designed to protect the rights of the people and provide justice.

She urged everyone in Nigeria to "pull together, and push each other, to tackle corruption, which is holding back the development of the country,” where 62 percent of the population lives below the poverty line despite the nation’s wealth in oil reserves.

The High Commissioner ended her remarks with a strong appeal for the Government to implement concrete policies to protect its vulnerable populations: children, women, the lesbian, gay, bisexual and transgender (LGBT) community, and people living with albinism.

As for the LGBT community, who are among the groups “living in fear”, she said the new law known as the Same Sex Marriage (Prohibition Act) violates international law in that it is discriminatory and seriously impinges on freedom of expression and freedom of assembly, and could lead to human rights defenders advocating for the rights of LGBT people receiving draconian prison sentences.

There is also concern among medical specialists that it will have serious negative consequences for public health in Nigeria, by driving LGBT persons underground and deterring them from signing up for HIV educational programmes, prevention treatment and care services.

“The law already appears to be having other dangerous side effects, even before it comes into force, with my Office receiving reports of widespread arrests of LGBT people in some states, some physical attacks, including by mobs, and other forms of harassment such as a rise in blackmail and extortion,” said Ms. Pillay. 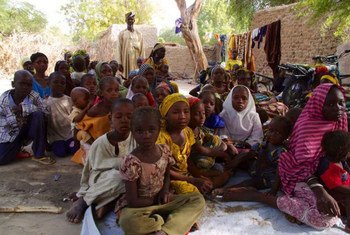 11 March 2014
The United Nations refugee agency said today it is increasingly alarmed at the humanitarian impact of continuing violence in north-eastern Nigeria and stressed the importance of protecting civilians.