Deeply concerned about violent confrontations between the police and members of opposition in Burundi, Secretary-General Ban Ki-moon is urging both the government and political parties to de-escalate tensions and to campaign against political violence ahead of the presidential and parliamentary elections in 2015.

In a statement released yesterday evening by his spokesperson, Mr. Ban deplored the “growing restrictions on the freedom of expression, association and assembly, especially the prohibition and disruption of opposition meetings by the police and the youth wing of the ruling party”.

Respecting these freedoms and other human rights is a precondition for free and fair elections next year, he stressed, adding that “Burundi cannot afford to miss this opportunity to consolidate its democratic gains”.

The Office of the High Commissioner for Human Rights (OHCHR) has documented at least 19 violent incidents involving members of the youth wing, known as Imbonerakure, since the beginning of the year, including beatings, acts of extortion and intimidation of political opponents, and the prohibition and disruption of political meetings.

The latest incident, also condemned by High Commissioner for Human Rights Navi Pillay, occurred on 28 February, when Imbonerakure members reportedly beat up members of an opposition party’s youth wing in the village of Busoni, in the Kirundo province.

In the statement, Mr. Ban called on the Government and the political parties to work with civil society representatives to resolve their differences peacefully through dialogue.

He also highlighted the political roadmap adopted in March of last year and the consensus enshrined in the Arusha Accords.

The Government has requested that a UN electoral observer mission be present in Burundi before, during and after the 2015 elections.

Last month, the Security Council renewed until the end of the year the mandate of the UN Office in Burundi (BNUB) to continue its peacebuilding work in a small country where hundreds of thousands of people have perished in largely inter-ethnic fighting between Hutus and Tutsis that erupted even before it gained independence from Belgium in 1962. 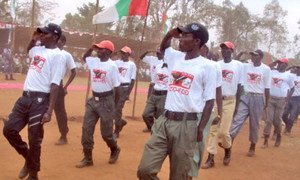 The United Nations human rights chief today voiced concern at the increasing restrictions on civil and political rights in Burundi, following a series of violent acts by the ruling party’s youth wing and the disruption of public meetings organized by opposition parties.