1 March 2014
Top United Nations officials on Saturday called for direct dialogue between all concerned amid the growing tensions in the Crimea region of Ukraine, as the Security Council held urgent talks for the second day in a row on the crisis.

Secretary-General Ban Ki-moon, who is “gravely concerned” about the deterioration of the situation, spoke by telephone with Russian President Vladimir Putin today.

“It is crucial to restore calm and proceed to an immediate de-escalation of the situation. Cool heads must prevail and dialogue must be the only tool in ending this crisis,” Mr. Ban said afterwards, adding that he appealed to Mr. Putin to urgently engage in direct dialogue with the authorities in the Ukrainian capital, Kiev.

In a statement issued earlier in the day by his spokesperson, the Secretary-General reiterated his call for the full respect for and preservation of Ukraine's independence, sovereignty and territorial integrity.

During the Security Council's discussions, members expressed grave concern about the rapidly deteriorating situation in Ukraine, Ambassador Sylvie Lucas of Luxembourg, which holds the Council presidency for March, told reporters after closed-door talks.

Council members also “stressed the need for an urgent de-escalation of the situation, and reiterated their call on all parties to exercise maximum restraint and to refrain from action and rhetoric which might exacerbate the situation,” she added.

Ukraine has been witnessing violent unrest for several months and last week saw the removal by Parliament of President Viktor Yanukovych. Tensions have been mounting in recent days in the Crimea region, where additional Russian troops and armoured vehicles have reportedly been deployed.

In addition, Russia's Upper House of Parliament today approved Mr. Putin's request for Russian forces to be used in Ukraine, 'pending the normalization of the public and political situation in the country.'

In a briefing to an open meeting of the Security Council, Deputy Secretary-General Jan Eliasson said key sites in Crimea such as airports, communications and public buildings, including the regional parliament, reportedly continue to be blocked by unidentified armed men. There are further reports of armed personnel taking control of regional administration buildings in several cities in the East and South of Ukraine.

“The new Crimean Prime Minister, Sergei Aksenov, today released a statement appealing to President Putin 'to provide assistance in ensuring peace and tranquility on the territory of the Autonomous Republic of Crimea',” said Mr. Eliasson. In the same statement, Mr. Aksenov announced that he was taking control of security in Crimea 'on a temporary basis,' and told all security personnel to declare allegiance to him rather than to the authorities of Kiev.

“At this crucial moment it is important to recall the mission of this Organization to always search for peaceful settlements of disputes. This is the essence of the UN Charter and should serve as our primary guide in this serious situation,” the Deputy Secretary-General stressed.

The Secretary-General's Senior Advisor, Robert Serry, today appealed to all sides to refrain from any actions that could further escalate an already tense environment in Crimea. Mr. Serry, who was dispatched to Kiev earlier this week by Mr. Ban, was requested to go to Crimea as part of his fact-finding mission.

“I have since been in touch with the authorities of the Autonomous Republic of Crimea and have come to the conclusion that a visit to Crimea today is not possible,” Mr. Serry said in a statement. He added that he will now proceed to Geneva, where he will brief the Secretary-General tomorrow on the mission and consult with him on next steps.

“In Crimea, I would have conveyed, also on behalf of the Secretary-General, a message for all to calm the situation down and to refrain from any actions that could further escalate an already-tense environment,” said Mr. Serry.

He noted that it was clear from yesterday's Council session that the unity and territorial integrity of Ukraine is not to be called into question. “This is a time for dialogue and to engage with each other constructively,” he stressed. 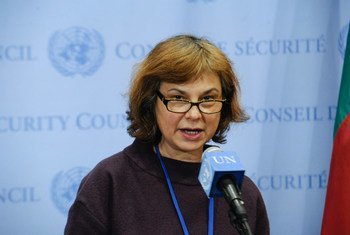 28 February 2014
The United Nations Security Council held this afternoon what its President described as an “urgent” meeting on the situation in Ukraine, with the body's members noting that it is important for all political actors in the strife-torn country to exercise maximum restraint and pursue inclusive dialogue.