28 February 2014
The United Nations Security Council held this afternoon what its President described as an “urgent” meeting on the situation in Ukraine, with the body's members noting that it is important for all political actors in the strife-torn country to exercise maximum restraint and pursue inclusive dialogue.

“The Security Council…reviewed with concern the recent developments in Ukraine,” said Raimonda Murmokaité, Permanent Representative of Lithuania, which holds the rotating presidency of the 15-nation body for February.

The Council held closed-door consultations at the request of the Permanent Mission of Ukraine to the UN, which appealed in a letter earlier today to the Council President for an urgent meeting “due to the deterioration of the situation in the Autonomous Republic of the Crimea, Ukraine, which threatens the territorial integrity of Ukraine.”

On Saturday, 22 February, Members of the Parliament of Ukraine – which had been witnessing mass protests since last November – voted to remove President Viktor Yanukovych, and an arrest warrant has reportedly been issued for his arrest. The move came after more than 100 people were killed last week in the latest wave of deadly clashes in the capital, Kiev.

Speaking to the press after the consultations, Ambassador Murmokaité said the Council had been briefed by UN Assistant Secretary-General for Political Affairs, Oscar Fernandez-Taranco.

“Support was expressed for the unity, territorial integrity and sovereignty of Ukraine. The Council agreed that it was important that all political actors in Ukraine exercise maximum restraint and called for an inclusive dialogue recognizing the diversity of the Ukrainian society,” said the Council President.

Amid the rapidly unfolding events in Ukraine, UN Secretary-General Ban Ki-moon has called for an inclusive political process to enable the country to emerge from the crisis, one which reflects the aspirations of its people and preserves its unity and territorial integrity.

“He reiterates his call for non-violence and urges all Ukrainians to express their differences peacefully and through dialogue, and to seek a durable solution through compromise,” Mr. Ban's spokesperson said in a

In addition, this past Tuesday, the Secretary-General dispatched Robert Serry to Kiev as his Senior Advisor to assure all citizens of Ukraine of the UN's support and also convey that he expects all key international actors to work collaboratively to help the country during the crisis.

Mr. Serry has held meetings with, among others, the new Speaker of Parliament, the Vice Prime Minister, the acting Minister of Finance, and the acting Head of the Ministry of Foreign Affairs, to discuss the situation and concerted efforts to bring about a stable and prosperous future. 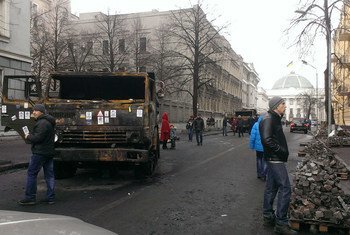 25 February 2014
A United Nations envoy dispatched by Secretary-General Ban Ki-moon held talks with senior Ukrainian officials in the capital, Kiev, and pledged the world body’s commitment to assist the country as it seeks to emerge from the current crisis.