Welcoming the start of the latest round of talks between South Sudan's sparring factions aimed at resolving the crisis in the country, the Security Council today stressed that the dialogue will only succeed if “fully inclusive”, and called for all detained and formerly detained political leaders to be allowed to take part in the process.

In a wide-ranging statement to the press that also addressed the Security Council's ongoing concerns about human rights violations and the deteriorating humanitarian situation in the world's youngest country, the 15-nation body expressed strong support to the mediation effort being led by the Intergovernmental Authority on Development (IGAD) and welcomed the start of the second round of the political talks between South Sudan leaders on February 11.

The talks, between the Government of South Sudan and the Sudan People's Liberation Movement/Army (SPLM/A), are taking place in the Ethiopian capital, Addis Ababa, achieved a ceasefire last month between the two sides.

What began as a political dispute between President Salva Kiir and his former deputy president, Riek Machar,erupted into full-scale conflict in mid-December.

Over the past two months, thousands of people are believed to have been killed by the fighting and some 870,000 others have fled their homes, 145,000 of them to neighbouring countries and 75,000 to the bases of the UN Mission the country (UNMISS).

Security Council members in their statement condemned violations of the ceasefire agreement by all parties, resulting in further violence, death and destruction and urged the establishment by IGAD of the Joint Technical Committee, as well as immediate deployment of the Monitoring and Verification Mechanism.

Urging full cooperation with IGAD and UNMISS, the Council called for redeployment and/or progressive withdrawal of allied forces invited by either side, and warned of the “serious consequences” which could result from any regionalization of the conflict. The Council also noted with serious concern recent reports alleging indiscriminate use of cluster munitions by parties to the conflict.

As for the fresh round of talks, the Council noted that the exercise now under way between the parties should aim to foster an inclusive political dialogue and national reconciliation ensuring durable peace and rule of law in South Sudan, “while addressing the underlying causes of the conflict and preventing further escalation of inter-ethnic violence and division.”

They welcomed the release of seven of the detained political leaders on January 29 and urged the immediate release of the remaining four detained leaders, “so that they can join Government, political, civil society, women, youth, traditional and religious leaders in participating in the political dialogue and a reinvigorated constitutional process.”

Stressing that the dialogue will succeed only if it is fully inclusive, the Council therefore called for all the detained and formerly detained political leaders to be allowed to take part in the political process and supported the intent of the IGAD Special Envoys to host a series of public consultations in support of national dialogue, as mandated by the IGAD Heads of State.

In the statement, Council members strongly condemned widespread violation of human rights and international humanitarian law, including “targeted violence against civilians and specific ethnic and other communities”, that have resulted in the loss of many thousands of civilian lives.

They also expressed concern about the deteriorating humanitarian situation and fast-approaching rainy season, that when combined with the existing food insecurity crisis of 3.7 million South Sudanese, “may result in famine in 2015 and regional instability”. In this regard, they demanded that all parties refrain from any acts of violence against civilians, especially women and children, and to expedite the safe and unhindered access of humanitarian organizations for the timely delivery of humanitarian assistance.

The Council reiterated its steadfast support for UNMISS and its vital mission on behalf of the international community to protect civilians in South Sudan, including foreign nationals, conduct human rights monitoring and investigations, and facilitate assistance to populations in need.

With that in mind, the 15-nation body strongly condemned all actions by Government and opposition forces that obstruct or impede the work of UNMISS and threaten its personnel and stressed that all such actions must cease. Deploring violations of the Status of Forces Agreement (SOFA), the Council demanded that all parties cooperate fully with UNMISS, cease obstruction to the implementation of the mission's mandate, and respect the inviolability of its protection sites, aircraft and vehicles.

“In this regard, [Council members] renewed their call to the Government of South Sudan to immediately accept those additional troops and police, without conditions and regardless of country of origin,” they said in the statement, adding that armed threats and attacks on United Nations personnel and facilities are unacceptable and may constitute a violation of international law. 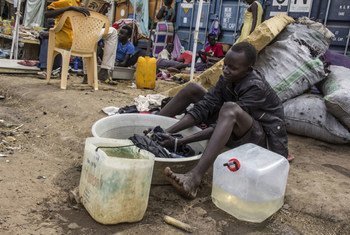 12 February 2014
Secretary-General Ban Ki-moon has welcomed the start yesterday of the South Sudan political talks between the Government and the opposition, and stressed the need for the parties to adhere to the ceasefire signed last month.