13 February 2014
The Security Council today renewed until the end of the year the United Nations mission helping Burundi recover from decades of ethnic war, despite the Central African country's request to end it earlier, as it moves towards crucial elections amid political violence and intra-party tensions.

In a unanimous resolution the 15-member body welcomed the continued progress that Burundi, a centrepiece of UN peacebuilding efforts to ensure that countries once ravaged by war do not relapse into bloodshed, has made towards stability, but it endorsed Secretary-General Ban Ki-moon's recommendation not to wrap up the UN Office in Burundi (BNUB) by mid-2014 as the Government requested.

Instead, it extended the mission until 31 December to continue its peacebuilding work in a small country where hundreds of thousands of people have perished in largely inter-ethnic fighting between Hutus and Tutsis that erupted even before it gained independence from Belgium in 1962.

The Council did however note the Government's request for a UN electoral observer mission before, during and after the 2015 elections in Burundi and requested the Secretary-General “to establish such a mission to follow and report on the electoral process in Burundi immediately at the end of BNUB's mandate.”

BNUB was set up in 2006 following a ceasefire between the Government and the last remaining rebel force to support peace consolidation, democratic governance, disarmament and reform of the security sector. It replaced the UN Operation in Burundi (ONUB), a peacekeeping mission which at its peak had nearly 6,000 military personnel.

Now its replacement by the regular UN country team, a collection of UN agencies concerned principally with development and humanitarian issues that exists in most nations around the world, as requested by the Government, will not occur until 1 January, 2015.

Burundi is often cited as a success story in UN efforts to consolidate peace in countries that have been ravaged by conflict and was the first, along with Sierra Leone, to be put on the agenda of the UN Peacebuilding Commission (PBC) when it was set up in 2006, to prevent post-conflict nations from relapsing into bloodshed.

But in his latest report to the Council, Mr. Ban stressed that President Pierre Nkurunziza's request that BNUB be drawn down within six months as of 15 February, so that Burundi can take fuller ownership of its political process, “poses a difficult dilemma, given the continuing need for a United Nations political presence whose functions cannot be entirely covered by the United Nations country team.”

Recommending a full year's extension, he noted Burundi's “substantial progress, overcoming formidable challenges since the end of the civil war,” but warned that such gains are far from irreversible as the country prepares for presidential elections in 2015 - “a litmus test” for long-term stability.

A UN strategic assessment conducted from September to December found that the political scene remains deeply polarized, with the Government using its dominance in Parliament to enact laws infringing on political and civil rights, contributing to a shrinking of political space, while the opposition threatens to take steps to confront the Government.

In its resolution today the Council asked Mr. Ban to prepare BNUB's transition and the transfer of appropriate responsibilities to the country team by 31 December, and urged it and its component agencies to scale up their activities and programming during the transition.

It called on the Government to foster inclusive elections in 2015 by improving dialogue between all national actors and ensuring space for all political parties, including from the extra-parliamentary opposition, safeguard human rights, and prevent abuses, particularly reported extrajudicial killings, mistreatment of detainees and torture, restrictions on civil liberties, and harassment, intimidation and violence committed by youth groups.

The Government was also urged to ensure freedom of press, expression, association and assembly in the run up to the elections, and fight impunity by ensuring impartial investigations and reinforcing the protection of victims, witnesses and their families. 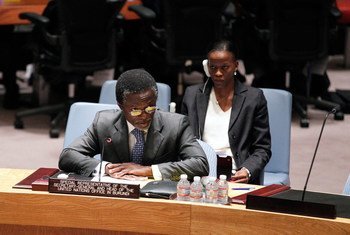 28 January 2014
Despite Burundi's request that the United Nations mission helping it recover from decades of ethnic war end by mid-2014, Secretary-General Ban Ki-moon is recommending its renewal for another full year as the country moves towards crucial elections amid political violence and intra-party tensions.